Sheikh Al-Meqdad: Two Weeks Ago, I was Taken to Hospital in Car Trunk 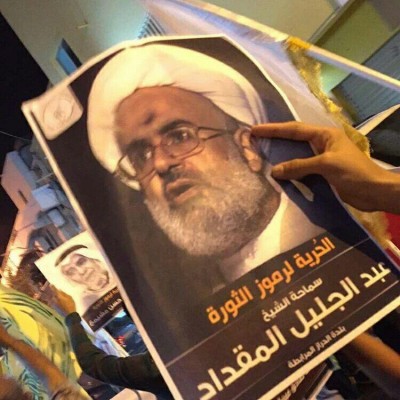 Bahrain Mirror: In an audio recording, Sheikh Abduljalil Al-Meqdad revealed that he had been subjected to what he called an "assault attempt," hours after the Interior Ministry claimed he had not been assaulted.

Sheikh Al-Meqdad, one of Bahrain's most prominent clerics, said: "It is an attempted assault in every sense of the word."

He explained that "4 or 5 people attacked me, and if it weren't for the intervention of some policemen to stop them, I would have been dead."

Addressing someone who appeared to be listening in on his conversation during the call, he said: "It is not good for you to hang up the phone, I'm talking about my treatment," as seen in the circulated recording.

"I was supposed to go to the doctor treating me, but they told me that the doctor was not there and I said there was no need to go then. This is the reason, but they asked me to write a confession in front of the camera, saying I was abstaining from treatment, but I refused."

"They chase you in order to write a confession that you refuse treatment. They have done this to us, which foreshadows a dangerous situation," he said, adding: "Two weeks ago, I was taken to the hospital in a car trunk during

Sheikh Al-Meqdad continues in his recorded testimony, "I lost my breath and I felt that I was suffocating. I was in a trunk while I felt pain in my head. I prayed to God to save me from this ordeal. I came back sweating."

"I was going to the hospital because white water dropped from my eyes. I had to. They take advantage of your case."

As for his health problems he suffered from, Al-Meqdad said: "For four years now, I have been suffering from head pain. I only got an appointment 3 months ago."

"They brought me to appointments twice and I was discharged and then brought back without seeing a doctor. The first time they explained that the "code" had changed and the second time they said the date had changed."

"My health condition is turning from bad to worse. My leg causes me a lot of pain. It has a tumor, doctors say. We have spoken out and we are helpless. This day I wrote a sign in prison that reads: Terrorism of State, State of Terrorism."

The call ended after Al-Meqdad pointed to the person watching his conversation: See, he is preventing me.