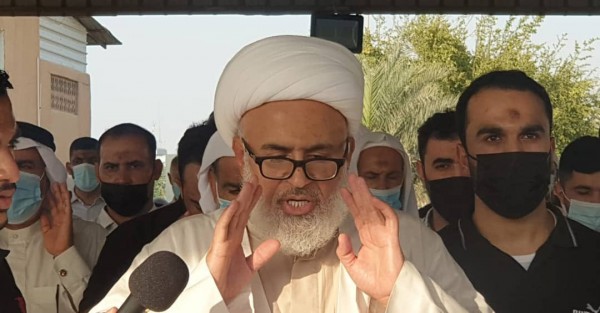 Bahrain Mirror: Sheikh Abduljalil Al-Meqdad was assaulted by prison guards after refusing to sign a statement that he refuses to undergo treatment in the hospital.

Information revealed that Al-Meqdad was supposed to be transferred outside the prison to receive treatment, but a policeman told him that the doctor was not present. Al-Meqdad then said there was no need to go to the appointment.

One of the guards asked Al-Meqdad to sign a declaration that he is refusing treatment, but he refused to sign. Four of the guards rushed to beat him had it not been for the intervention of other guards to prevent them.

Sheikh Al-Meqdad was insulted as well.

Human rights activist Ahmed Al-Wadaei said via his Twitter account that the policeman named Ali Farhan, who holds a Syrian nationality, is one of the most prominent involved and is responsible for transferring prisoners for treatment outside the prison.

He added that Sheikh Al-Meqdad suffers from a deliberate medical negligence that could pose a threat to his life, he said, as he has been suffering for years from severe head pain without being diagnosed or treated. He also suffers from deviations in the spine.

He also suffers from a tumor in his leg that hinders his movement.