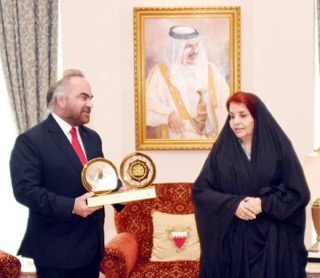 Bahrain Mirror (Exclusive): Soon Abdulrahman Jawahery, CEO of Bahrain Petroleum Company (Bapco), will complete a year in office. How has Bapco's status been during his tenure?

Information says that since his arrival, Abdulrahman has been working to bring one prize to the company, through which he aims to succeed in achieving two things in a single move.

The award is not related to oil or its derivatives, but is "Princess Sabeeka bint Ibrahim Al Khalifa Award for the Advancement of Bahraini Women", and for this reason the company's budget is almost depleted due to recruitment on a gender basis only and employing huge numbers of women, without setting the standard of competence in this process.

The company's main task in Jawahery's policy has become to please the Supreme Council for Women, mainly its president, the king's wife and the prime minister's mother.

Al-Jawahery has mobilized the company's financial resources to accomplish this task in all departments, even those that have a different nature and require the work of the shift system, which is not applicable in the system of the company that manages the most important natural resource in the country.

Al-Jawahery doesn't take criteria into consideration, he is interested in one thing: the image of winning the kinship of the king's wife and PM's mother. However, the company and the effects of random recruitment are not important, especially that Al-Jawahery, member of the Special Committee, and since he was the head of the petrochemical company, used to spend from the company's funds to sponsor any event related to the king's wife in order to inch closer towards obtaining status and influence until he actually received the award of "Figure Supporting Woman", which seems to have been specially created for him, as he never failed to disburse the company's money and even spent it to sponsor the garden show sponsored by Sabeeka bint Ibrahim.

It is not unlikely that Bapco does something similar. Recently, Bahrain Aluminium CEO Ali Al-Baqali honored 18 female employees from various departments of the company for completing a training program aimed at developing leadership skills. Al-Baqali's goal is the same as Al-Jawaher''s goal: the Princess Sabeeka prize.

In the same context, Silat Al-Khaleej company, a large joint venture between the government and the private sector, which acquires the operations and management of call centers in most ministries and government agencies, announced that it will participate in her Royal Highness Princess Sabeeka bint Ibrahim Al Khalifa award for the advancement of Bahraini women. The company listed its steps in gender-based recruitment.

This is how things are going on today in the rest of the ministries, companies and major institutions in the country, all of which want to gain momentum for the prize and to gain political closeness and satisfaction of the senior figures.

This is a model of mismanagement, rampant nepotism and interests in top significant companies made up of public funds, all competing for an award for clear political goals. All of this comes without considering productivity or solving  problems of rampant unemployment among young graduates who have not yet secured jobs despite their competencies and degrees.