How Did Late Saeb Erekat See Future of Bahrain after Normalization? 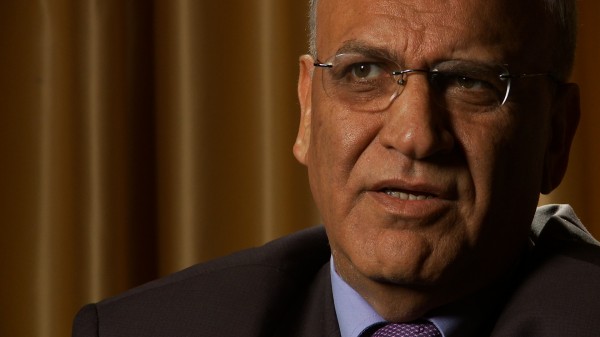 Bahrain Mirror (Exclusive): The rapid pace the Bahraini regime is following in introducing the Zionist regime and its subjects to the homeland is unbelievable.

This rapid pace shows that it is the regime's final choice, where there is no return and no retreat; a choice similar to the state of war after the launch of the first shot or shell, when everyone then knows that there is no coming back. This is exactly what the regime's apparatus in Bahrain and all its security, military, economic, media and other machines do every day.

A careful reflection on this hastiness in introudicng Israel and bringing it in, along with its representatives, is well described in the words of late Saeb Erekat, Secretary General of the Executive Committee of the Palestine Liberation Organization, when he told Reuters on September 15, 2020 that "the Emirati and Bahraini deals were in fact about peace in exchange for protection, and Kushner made the two countries choose between normalization with Israel and loss of US protection."

It is therefore a matter of existence and protection. This is how the Bahraini regime understands its relationship with the occupying entity, and this is how late Saeb Erekat understood the future of Bahrain after normalization; that it would be just an Israeli protectorate.

The regime has come to believe that its existence, protection and survival have become directly linked to Israel, and that its relationship with it is a condition of life and survival, so it started to work according to an exceptional plan that evokes the new protector of the country.

It is a forced process to implant new security, military and economic navigation that extends from the body of Israel's entity and penetrates into the arteries of Bahrain. Perhaps it can be confirmed that this is the most dangerous thing the country has ever faced throughout its history. This process aims to disarm the country and uproot it from its religious, national and cultural identity.

Here it is the American Jewish Committee, with all its Jewish weight, wandering through the corridors of the government and visiting three of its most important ministries: the interior, finance and foreign affairs. It's an agenda that is implemented every day.

All these ideas crumble in front of the daily scenes of the activity of the Zionist ambassador to Bahrain, who became the new High Commissioner in partnership with his American and British colleagues.

These are the most dangerous moments of the homeland, coming in light of the approach of a new project to "stabilize" this situation, which is the new parliamentary elections that have one goal-to consolidate Israeli presence in the country and plant strange organs in it. Here, it is possible to ask all the people of Bahrain, what are the priorities of this stage? Is it their livelihoods? Is it human rights? Or is it the normalization file which means that Bahrain would remain as is? Or is it all these issues combined?