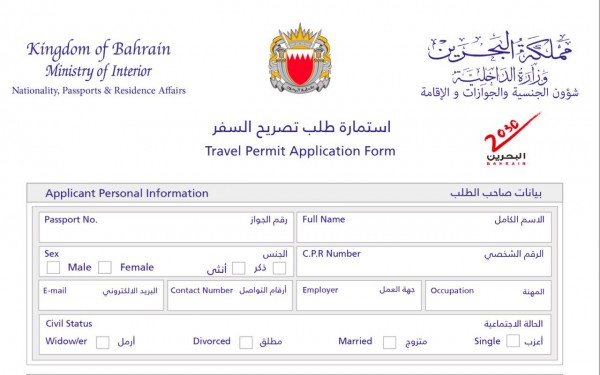 All destinations are open for travel including the Israeli occupying entity and all people are allowed freedom of movement, and Article 19/B of the Constitution seems to apply to everyone, except Shiites.

What does it mean when Bahrain issues a travel permit application form?

It means that everyone is welcome in Bahrain except Shiites, even if they are from the Gulf. Everyone is allowed to travel wherever they want except Shiites. All practices including debauchery are allowed except the religious rites of Shiites.

Bahrain did not even seek to ban travel to and from all the countries where the Coronavirus pandemic had spread fiercely, including European countries, mainly Britain, and some Asian countries, such as India and Bangladesh, but only limited and restricted it for a while and then lifted it.

It was very surprising to some people, but anyone who knows the behavior of the authorities realizes that it likes to use all the available tools and circumstances in order to achieve its sectarian goals, harassing its Shiite citizens.

Of all the countries, the travel ban to Iran, Iraq and Lebanon has been at the top of the list since the pandemic began, and let's not forget the crisis of those stuck in Iran of whom at least 7 Shiite citizens passed away, due to the arbitrariness of preventing them from returning to Bahrain even when they tried to come at their own expense, while other countries returned their citizens on exceptional and urgent flight schedules.

These countries are closely linked to the beliefs and faith of the people. Shiites have always pinned their hopes for hundreds of years on the holy shrines in Karbala, Mashhad, Najaf, Qom, Kadhimiya, Samarra, Damascus and Medina.

But what is new today is that the authorities will introduce a new procedure to obtain approval and travel permission. This is considered the peak of backwardness, as neither the constitution nor the laws allow this blatant measure.

Travel restrictions are not applied to all countries, as it is not required for travel to Turkey, European countries, the US, not even the occupying entity of Israel; however, their completely open goal is to restrict the travel of Shiites only.

If the authorities are trying to calmly test the waters to pass this measure today, and give approvals quickly, to see if people will accept it, they will put conditions and use this to effectively prevent their travel and put obstacles.

Therefore, people are not expected to accept this measure, and it is not acceptable for religious tour organizers and travel offices to take this measure and facilitate the restriction of people's travel to avoid obstacles today, while they will be the most affected tomorrow when arbitrary bans are activated under various pretexts.

Today approvals may be given, and tomorrow when the permit becomes a fait accompli, the ban will be temperamental and sectarian, which is not out of the norm of the practices of the security authorities who used the Coronavirus pandemic to target Shiites in their beliefs and prevent them from practicing rituals or traveling to holy places, at a time all nationals in Bahrain were allowed to travel wherever they wanted.

There is no law or legislation that allows this measure, but it is in flagrant and clear contradiction with the Constitution, legislation and everything, and rejecting such a thing is a completely legitimate act.

They are testing the waters and if the people respond favorably, they will impose bans.