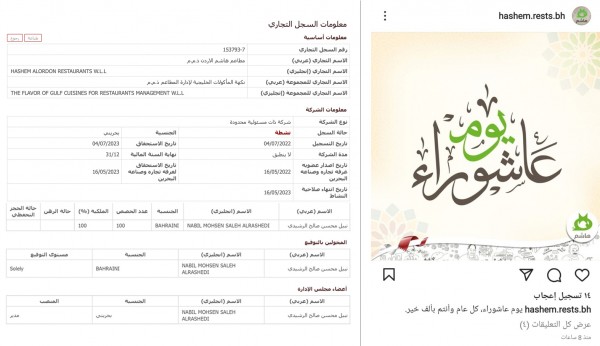 Bahrain Mirror (Exclusive): An ad posted by a Jordanian restaurant in Bahrain caused a wave of anger. A restaurant known as "Hashem Restaurants Jordan" which owns a series of branches in Bahrain posted a photo on its Instagram account that read "Happy Ashura Day". This expression stirred anger of the restaurant followers on Instagram, which made it delete the post and all the comments below, although comments are open on ads of the restaurant's other account.

"You didn't only lose customers. You have to prepare an answer before God when he asks you: Why were you happy on Imam Hussein's martyrdom day?"

It is to note that the restaurant which specializes in serving beans and Taameya "Hashem Resturants Jordan" is registered as a limited liability company under Nabeel Saleh Al-Rachidi name and is managed by employees from Jordan and Egypt.

According to the e-government's commercial records service, the restaurant has 7 other registries that practice the same activity.