Did "Lyrica" Case Overthrow Inspector General of the Ministry of Interior 2 Years after His Appointment? 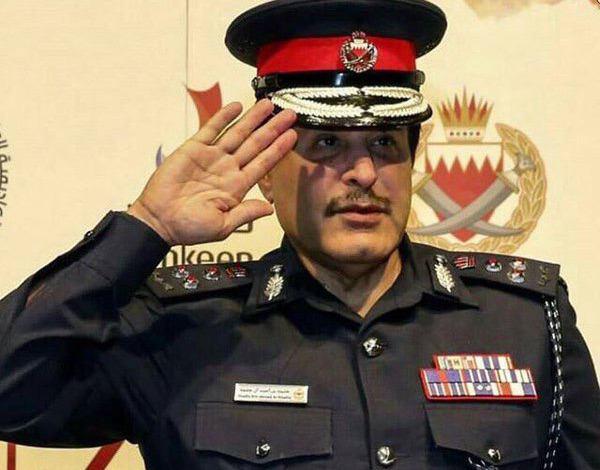 Bahrain Mirror (Exclusive): Nearly two and a half years after his appointment as undersecretary, the Inspector General of the Ministry of Interior, Major General Khalifa bin Ahmed Al Khalifa, has retired. But why should this "retirement" be seen as different from any other "retirement"? It is uncommon among the sons and daughters of Bahrain's royal family to retire from their posts. They usually continue to promote state positions and remain in their positions until they die.

Do they recycle positions? Yes, they are transferred at times from one position to another following a scandal or a major event. They are pulled from the spotlight to positions in the shadows, but they never retire. Death alone is the true and guaranteed meaning of the "retirement" of the sons and daughters of the royal family.

For instance, the current President of the Bahrain Authority for Culture and Antiquities Shaikha Mai, from a weak wing of the ruling family, was relieved of her post when she was assistant undersecretary for the culture and national heritage sector in the Ministry of Information before being later returned to her post and even promoted to a minister.  It was later revealed that she was relieved of her post as a punishment as a result of an internal dispute with a minister affiliated with a wing in the ruling regime.

Was this case too big for the undersecretary to hold responsible for, noting that this ministry's primary responsibility is ensuring security and managing the country's disciplinary authority?

In 2016, he posted on his Instagram while in a drunken state a barrage of insults against the country's Shiite citizens, describing them as "polytheists, sons of adultery and grave worshippers." The Interior Ministry later "took over" and handled the case, using the pretext that his account was hacked. But he was forced to close his account, which at the time had 45,000 followers.

As for the "Lyrica" case, the breach appears to have widened, particularly with the disclosure of much data in this case and the arrest of an interior ministry officer.

His retirement came nearly a year after he was accused of direct responsibility for distributing narcotic pills to girls' schools in Bahrain. Bahrain Mirror has published a full documented file containing many of the mysteries of this case and the role played by Khalifa bin Ahmed. Psychologist Dr. Sharifa Siwar announced in January after she could leave the country for London the name of the person in charge of the "Lyrica" cell that rocked public opinion in 2020, noting that most of the girls' confessions were about him.

He was the person who was used by interior ministry officials, Ibrahim Bou Alay and Mohamed Hazim, to threaten girls with when they refused to cooperate with them in distributing narcotic pills to their school classmates. He is the "back [support]" or so they used to call him. "Sheikh Khalifa bin Ahmed is in the back you can lean on, if anyone gets caught while distributing narcotic pills, the Sheikh will save her." This was reiterated by the two officers to the girls all the time.

This time, it seems that he was unable to find a deceiver to erase his tracks after his scandal expanded. The repercussions of this case have led to shedding the light on another figure more important than him, the son of King, Sheikh Khalid bin Hamad Al Khalifa, First Vice President of the Supreme Council for Youth and Sports and President of Bahrain Olympic Committee, who was known later to be an "addict", which is a scandal that is too difficult to be swept under the rug. What was the solution then? The retirement of Khalifa.