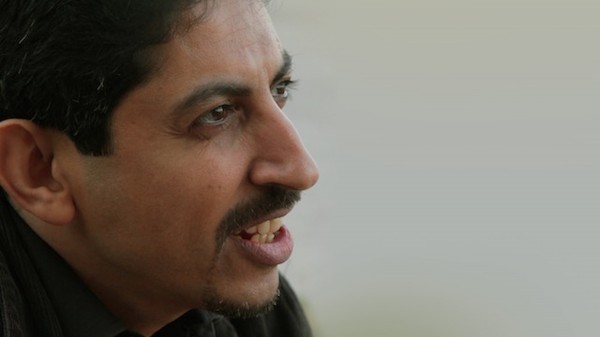 Bahrain Mirror: The situation of Bahraini prisoner of conscience Abdulhadi Al-Khawaja has dramatically worsened since the prison administration imposed a series of punitive measures against him, including denying him contact with his family last week, Euro-Med Human Rights Monitor said in a statement expressing grave concern.

Last February, the administration at Bahrain's Jaw Prison prevented Al-Khawaja from receiving health care, including medical appointments to follow up on the condition of his right eye. It is important to note that he is being deprived of treatment he'd been receiving to specifically counter the effects of torture he was subjected to in prison.

According to his daughter Maryam Al-Khawaja, Bahraini authorities have continued to apply punitive measures against the detainee. Abdulhadi Al-Khawaja informed his family during their most recent phone call on March 30 that "he will no longer be allowed to make calls".

The isolation of Al-Khawaja from the outside world and the deliberate neglect to provide him with necessary medical care may indicate nefarious intentions that could amount to a slow killing. Al-Khawaja suffers from several diseases, and the threat of aggravation should raise an alarm, as complications could put his life in imminent danger. Cutting off contact with the outside world ensures that his physical and psychological health status will be concealed, and enables authorities to uphold this disgraceful policy.

Maryam Al-Khawaja believes that her father is being subjected to these measures on the basis that he chanted slogans supporting the Palestinians and denouncing Israeli policies in the prison yard last February.

Since his arrest, Al-Khawaja's health has rapidly deteriorated as a result of torture-a seemingly deliberate policy of medical neglect, as Jaw Prison's administration consistently delays or cancels his medical appointments, even the most urgent ones, and refuses him access to copies of his medical records. In some instances, they keep him from receiving medical supplies to relieve his pain, and he is unable to sleep normally due to the severity of multiple injuries all over his body.

The case of Al-Khawaja is one example of the massive human rights violations being committed inside Bahrain's prisons, particularly its Jaw Prison. In April 2021, political prisoner Abbas Malallah died at Jaw Prison due to medical negligence, according to local human rights lawyers. In the same month, the Office of the United Nations High Commissioner for Human Rights (OHCHR) expressed its dismay at "the use of unnecessary and disproportionate force by police special forces to dismantle a peaceful sit-in at [Jaw] Prison", and called for an immediate "thorough and effective investigation into the violent repression of the sit-in".

The Euro-Med Human Rights Monitor called on the Bahraini authorities to provide medical care to the detainee Abdulhadi Al-Khawaja immediately and without delay, and enable him to exercise all his rights, especially the right to contact his family, and to obtain access to his medical records, which is necessary if he is to receive proper medical care and highly appropriate given his vulnerable state.

It also called on the United Nations Special Rapporteur on the issue of torture and other cruel, inhuman or degrading treatment or punishment to conduct a fact-finding visit to the Kingdom of Bahrain, to witness the violations that prisoners of conscience are subjected to in prisons, and to submit a report to the Human Rights Council and the General Assembly of the United Nations in order to put pressure on Bahraini authorities to stop these violations.

In April 2011, Bahraini authorities arrested Al-Khawaja in a violent manner, causing him facial fractures and the temporary loss of consciousness, and subjecting him to further physical torture inside the prison and the deterioration of vision in his right eye. In June 2011, a military court sentenced him to life imprisonment for his legal activities and participation in the popular protests that took place across the country.