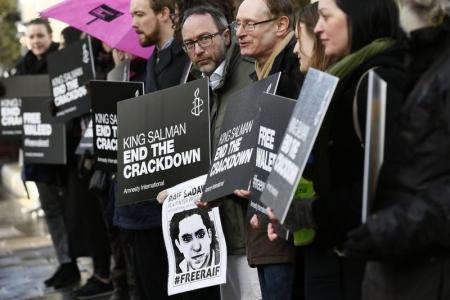 Bahrain Mirror- Reuters: Saudi blogger Raif Badawi was released from prison on Friday after spending 10 years behind bars, his wife said, but rights groups said he is still banned from travel for another 10 years.

Badawi, who created and managed an online forum, was arrested in 2012, charged for "insulting Islam" and subsequently sentenced to 10 years in prison and 1,000 lashes. He received 50 lashes in 2015.

His public flogging caused an international outcry and prompted strong criticism of Saudi Arabia's human rights record, including its restrictive laws on political and religious expression.

"After 10 years in prison #Raifisfree," tweeted his wife Ensaf Haidar, who lives in Canada, where she and their three children were granted political asylum.

The Saudi government did not immediately respond to a request for comment.

"After almost a decade in prison, Canada is relieved to hear news that Raif Badawi has been released. My thoughts are with his family and loved ones," Canadian Foreign Minister Melanie Joly said on Twitter

Badawi set up the "Free Saudi Liberals" website where he criticized the Saudi clergy and called for changes in the way religion is practiced in Saudi Arabia.

He was also fined 1 million riyals ($266,567). Prosecutors challenged an earlier sentence of seven years and 600 lashes as too lenient.

In a rare public criticism, the United States urged the kingdom on Tuesday to review cases of "prisoners of conscience" and lift travel bans and other restrictions imposed on women's rights activists previously released from jail.

Badawi's sister, Samar Badawi, was detained in July 2018, along with more than a dozen other activists, on suspicion of harming Saudi interests. She was released last year.