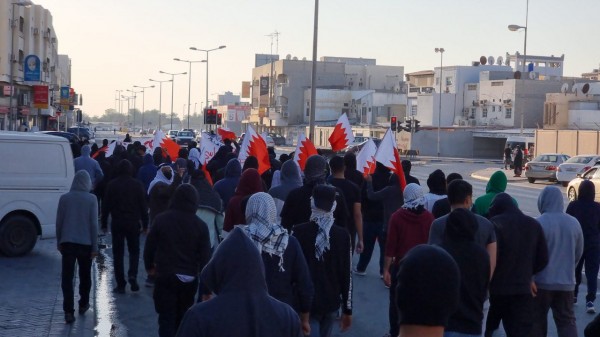 Bahrain Mirror: The Al-Wefaq National Islamic Society monitored the most prominent events in February 2022 and the violations carried out by the authorities, which resulted in the arrest of dozens, including a woman and three children, in addition to the enforced disappearance of two detainees.

According to the Al-Wefaq report, the cases of arrests were 28, including one woman, Fadeela Abdulrasoul, and 3 children; Ali Mohsen Al-Arab, Hussein Khamis, and Ali Hussein Al-Sheikh.

The society documented 10 cases related to individual violations in prison, represented in ill-treatment and denial of treatment.

Two cases of individual protests were recorded in Jaw Central Prison, both were cases of hunger strikes by Sheik Mirza Al-Mahrous and Mohammad Hasan Abdullah Al-Ramel.

The security authorities stormed 44 areas, while the number of raids reached 200, mainly in Sanabis, Al-Daih, Jidhafs and Sitra.

Dozens of citizens took part in 118 peaceful protests, most notably in Sanabis.