In his Visit to 5th Fleet, Gantz Says Landing in Israel Air Force plane in Bahrain is Significant Milestone 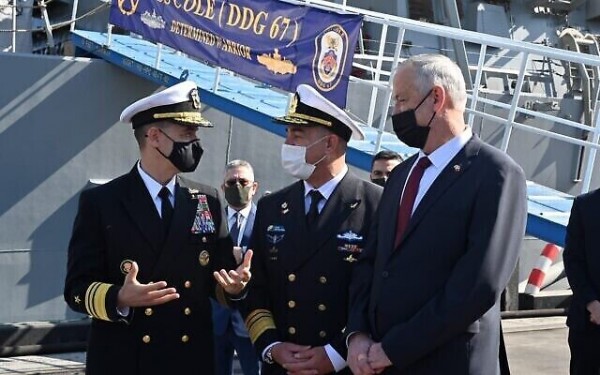 Bahrain Mirror: Military ties between Israel and Bahrain are strengthening, and naval cooperation between regional countries under American leadership is one of the largest of its kind in the world, a senior American naval commander stated.

In a report published on Thursday, Vice Adm. Brad Cooper, commander of the U.S. Naval Forces in Central Command, said the importance of the presence of the United States Fifth Fleet in Bahrain lies in strengthening military ties between Israel and Bahrain.

Cooper noted that the signing of the Abraham Accords and the transfer of Israel into the U.S. military's CENTCOM (Central Command, responsible for the Middle East) area of responsibility, away from EUCOM (EUCOM), are two new factors that can be used to further strengthen regional naval security.

Defense Minister Benny Gantz visited the US Navy's 5th fleet during his historic visit to Bahrain.

He welcomed the "long standing partnership" between the US Navy and Israel and said "deepening cooperation will help defend against the common enemy of Israel, the United States and Bahrain".

"We will continue working together so this region can enjoy peace, prosperity and security," he said, adding that it is a "strategic necessity" against maritime and other threats in the region, referring to Iran.

"The fact that we can land here in an Israel Air Force plane and visit, together with our partners, with the Commander of the Navy and talk openly about issues of defense for the security of the region is a significant milestone," Gantz said.

The Hebrew "Israel Defense" website said that one of the real reasons or goals for Gantz's visit to Bahrain is the allocation of a seaport in Bahrain to use it as a base for the Israeli navy against Iran with US partnership or mediation, and Bahraini approval.

Gantz's visit comes as Israel is participating for the first time in the largest naval drill with 60 other naval fleets, and as the United States announced that it would send advanced air fighter jets and missile destroyers to the UAE to help it in its fight against Houthis, who fired missiles at Abu Dhabi during Israeli President Isaac Herzog's visit.