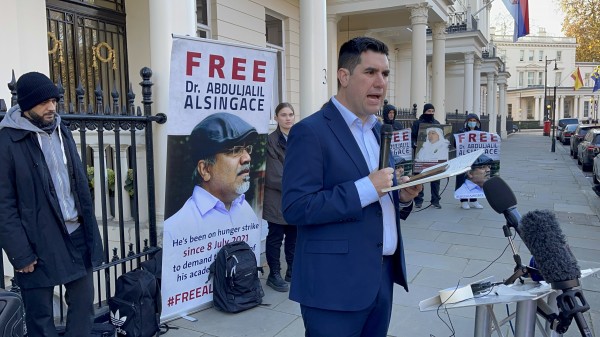 Bahrain Mirror: London-based activist Ali Mushaima announced starting a hunger a strike on (November 23, 2021), in solidarity with detained academic Dr. Abduljalil Al-Singace and to demand the release of his father, Haq Movement leader who is sentenced to life imprisonment.

This was announced in a press conference organized yesterday in front of the Bahraini Embassy in London. Member of the UK Parliament Richard Burgon took part in the conference and asked the British Foreign Secretary to denounce the arrest of detained Bahraini academic Abduljalil Al-Singace and all political prisoners and demand their release. Burgon said "Our government continues to avoid Bahrain's accountability for its human rights violations."

In a statement to Al-Mayadeen Channel, Ali Mushaima said "The hunger strike is exhausting in this cold weather, but whenever I remember how Al-Singace and my father were tortured in bitterly cold weather, how cold water was poured on them and how they were forced to stand in front of the air conditioners that were put on the coldest setting, I see that no matter what we offer, it is considered little compared to them."

It is to mention that Ali Mushaima protested last week in front of the Bahraini Embassy in London and decided to launch a hunger strike on the second week of his sit-in.