Mushaima Starts One-Week Protest in front of Embassy in London, followed by Hunger Strike in Solidarity with Al-Singace 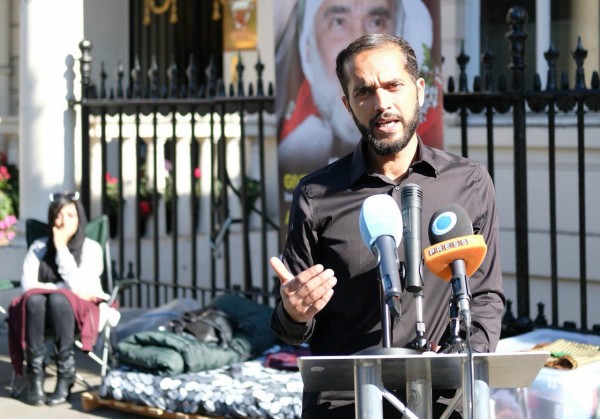 Bahrain Mirror: The London-based Bahraini activist Ali Mushaima announced that he will start a protest on Monday in front of the Bahraini embassy in London for a week and will then launch a hunger strike in solidarity with jailed academic Dr. Abduljalil Al-Singace and to demand the release of his father, Haq Movement leader who is sentenced to life imprisonment.

"Out of loyalty and return of favor, I decided, with complete determination, to begin protest steps, after which I will join Dr. Abduljalil al-Singace in his hunger strike in the battle of "the empty stomachs", seeking help from Allah and expressing "a word of truth against an unjust sultan". I'm going to sit on the side of the road starving, demanding freedom for Al-Singace and unconditional freedom for my father Mr. Hasan Mushaima, who has become frail and ill and whose continued unjust imprisonment has become a serious threat to his life," he said via his Twitter account.

He added "I will protest in front of the Embassy of Bahrain on Monday (November 15) for a week during official working hours and then go on a hunger strike the following week."

In 2019, Ali Mushaima went on a 46-day hunger strike in front of the Bahraini Embassy in the British capital.

Mushaima protest gained supported at the time. Well-known activists from around the world visited him to stand in solidarity with him, while some of them spent nights with him on the street.

On September 15, 2019, Ali Mushaima announced the end of his hunger strike after medical advice and promises that his father would receive his right to treatment.