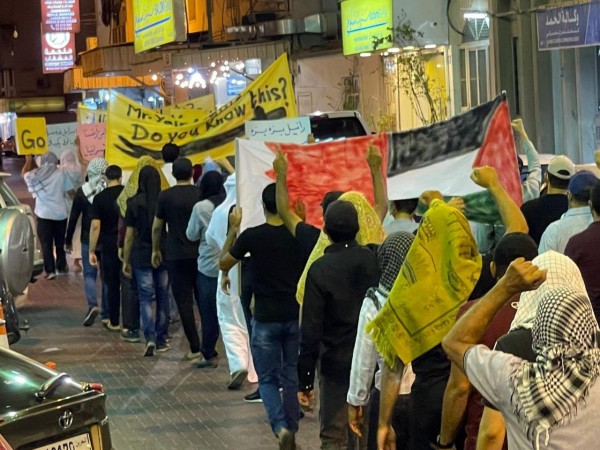 Bahrain Mirror: Bahrain witnessed protests on Thursday (September 30, 2021), coinciding with a visit paid by the Israeli Minister of Foreign Affairs, Yair Lapid, to Bahrain's capital, Manama, for the Israeli entity's inauguration of its embassy.

Dozens of people took to the streets of the old business district in Manama to denounce normalization with the occupying entity, and protest Minister Lapid's visit, despite the Bahraini authorities' ban on demonstrations.

Demonstrators chanted slogans condemning the crimes of the Israeli occupation against the Palestinian people, and expressed their refusal of normalizing relations with the Israeli regime.

Angry protestors blocked roads west of Manama, affirming their position that rejects the occupation, and supports the right of the Palestinian people of sovereignty over their entire territory.

Different areas across the country witnessed similar protests and burning of Israeli occupation flags, as slogans were chanted deploring what they described as "the authorities' betrayal of the Palestinian cause."

On social media, Bahrainis voiced their rejection of the authorities' normalization of relations with the Israeli occupation.

Under the hashtag #Bahrain_Rejects_Zionists, activists stated their refusal of what the government has done, stressing that such acts do not represent the Bahraini people.