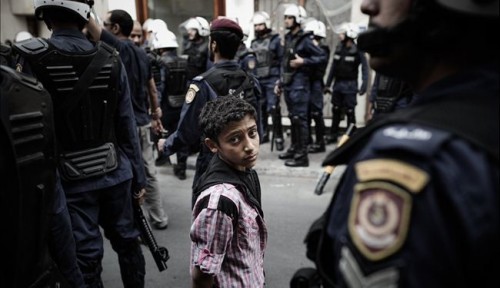 The new survey work is part of the "Zero Distance" program presented by correspondent Salam Hindawi.

According to the newspaper, sources from the channel, which broadcasts from the Qatari capital, Doha, revealed that the producers will convey shocking facts from inside the Dry Dock Prison, and reveal violations against detained children with exclusive documents and recordings.

Prisons in Bahrain are fully owned and operated by the state. They are run by 3 different security forces, including the National Security Agency (NSA), the Bahrain Defence Force (BDF) and the Ministry of Interior (MoI). Administration of prisons is overseen by a number of judicial authorities, as well as the public prosecution.

Out of a total of 20 prisons, there are 4 main prisons, one of which is for women.

Until recently (late 2011), children older than fifteen (but under 18) were tried in a criminal court rather than in juvenile court. In 2001 the Working Group on Arbitrary Detention recommended that "all juvenile detention centers run by the Ministry of Interior be transferred to the Ministry of Social Development". However, this recommendation hadn't been implemented. In 2011, some children were brought in front of martial courts.

During security crackdowns on political and human rights activists in August 2010, 76 children were reportedly arrested including a 10-year-old child. In total 355 individuals were arrested of which children made up 21%.

The Bahrain Centre for Human Rights said that the NSA was behind most of the arrests and "continuous physical assaults" on the children. Authorities claimed that most of the children arrested were engaged in protests and protest-related activities such as tire burning.

Children were reportedly held in the same detention centers as adult prisoners being tried on criminal accusations such as illegal drug distribution. Lawyers reported that some children had suffered beatings and showed marks of torture, and two children had complained about mistreatment during trial.

The BCHR has documented 188 cases of child arrests during the Bahraini uprising which were described as "unlawful and many cases fall under kidnapping or abduction".

Almost all of them reported mistreatment while in detention and some were transported to hospitals after being detained and had torture marks.

The episode will be aired on Sunday at 10:05 PM, KSA time, on Al-Jazeera Channel.