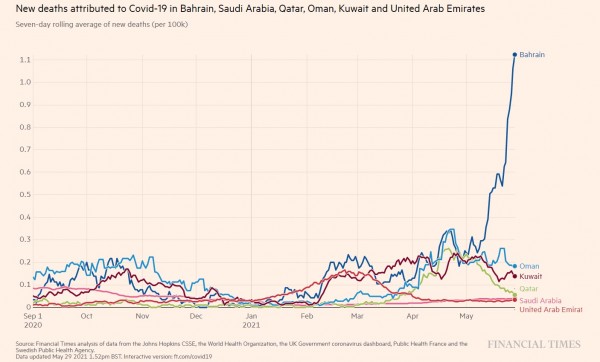 Bahrain Mirror (Exclusive): The epidemic equation is that: the more the virus spreads among members of society with individuals' non-obedience to precaution measures, the more people are infected... The higher the number of infected people, especially among the most vulnerable group (elderly and sick people), the higher the number of people admitted to hospitals and the more their health deteriorates until they are transferred to the intensive care unit... The more patients admitted to the ICU, the more deaths cases are recorded.

This is how Dr. Monaf Al-Qahtani explained the increase in casualties during a press conference over 10 days ago.

However, the last press conference held by the National Medical Taskforce for Combating the Coronavirus highlighted that the closure decisions announced on May 27, 2021 have proved to be effective in supporting mitigation efforts and flattening the curve, noting that on May 29 there were a total of 28,798 cases, and by June 8 the number of cases had decreased to 19,238.

Responding to these accusations, the team denied any deliberate reduction in the number of tests, saying that this decrease is due to the change in people's behavior and closure decisions. Nonetheless, Al-Qahtani insisted on rejecting an earlier proposal to apply this idea (like other countries) saying  "we don't manipulate numbers because these numbers are people's lives."

The taskforce members said that tests are carried out based on "necessity" according to the announced protocol in Bahrain. Meanwhile, none of the members explained anything about this protocol.

What has changed in protocol tests in Bahrain and how has this affected the numbers?

The government considered the protocol update a success. Two weeks ago, the government announced an update in the testing protocol, directly caused by the inability to tolerate the pressure it was exposed to. The new protocol canceled the tracking of all people in contact with active cases and limited testing to those who have symptoms.

With this measure, it was sure that the number of tests would decrease, regardless of the safety of this measure and its effect on the spread of the virus. The paradox is that the health minister's undersecretary continued to brag even while announcing the cancelation of this measure.

The number of registered cases decreased while deaths and critical cases increased.

Al-Manea explained why this increase in number of deaths (during May) is not considered shocking or a problem, arguing that the mortality rate for recorded cases remained the same at 0.4%, one of the lowest in the world. He noted that mortality did not increase as the number of infections increased.

The number of daily recorded cases decreased to one third of the number recorded in May 26 (from about 3000 in some days to about 1000), yet the death rate increased. In addition, the number of cases in intensive care increased as well, let alone the cases receiving treatment. What's the reason?

"The increase in deaths does not mean that there is a failure in providing protocol treatment," said Lt. Col. Monaf Al-Qahtani. This is how in short, he defended what is going on. But what do we know about the treatment protocol. Who of our representatives supervises the implementation of this protocol in the state's hospitals (run by the military), how can we hear the voices of distress from patients from the intensive care rooms (just before they die) without feeling worried?

How can we trust them as they are boldly misleading people (in order to defend the Bahrain Team and its leadership)? Why can't we at least say that they were wrong? (There were even errors in the released numbers. In May's last week statistics, the ministry published the wrong number of weekly cases. The correct number was 19538, while the ministry wrote 18184. The number hasn't been corrected yet).

Where is the mathematical logic of today's epidemic equation? Why have the cases decreased yet the deaths and intensive care unit cases have increased? Why did the equation suddenly fail?

Black May will remain a witness to the state's failure.

What has been happening since black May will remain a witness to the failure and political crime committed by the authorities. In May, Bahrain lost 334 citizens from Coronavirus, more than 220 of them were Bahrainis, 27 of whom were in their 30s and 40s. Al-Qahtani couldn't solve May's confusing answers; he, however, increased their ambiguity. We still don't know what is going on inside the intensive care rooms. We still don't know how (political, medical and administrative) decisions are taken. All we know is that we have no role in any of this.

One third of the lives were claimed in one month. 63,000 infections out of 240,000 were recorded in May (more than the quarter). Then, a medical paper was issued warning that there are 150 genetic strains of Coronavirus in Bahrain. The Health Ministry didn't give any comment.

As the United States celebrates the lifting of masks, Bahrainis cannot even hold funerals for their dead. Bahrain came in the second rank worldwide in terms of infections with respect to population during the last week of May (after the Maldives). It came in the fifth rank in terms of deaths with respect to the number of population. Bahrain even recorded numbers higher than that registered in India. This is happening while Britain is recording zero deaths and Gulf States are registering about a third of the number registered in Bahrain daily.

Numbers to Dr. Monaf Al-Qahtani and Dr. Walid Al-Manea and their friends are not deemed lives as they said. Through misleading and manipulating the rates and protocols (which are not subjected to the control of government institutions) they wanted to lessen the impact of the disaster of increased mortality rate but instead of providing solutions they only blamed the people and supported the government's measures. Corona, after all, is nothing but a number game.