A Memoir of the Suppression of Prison Unrest in Bahrain 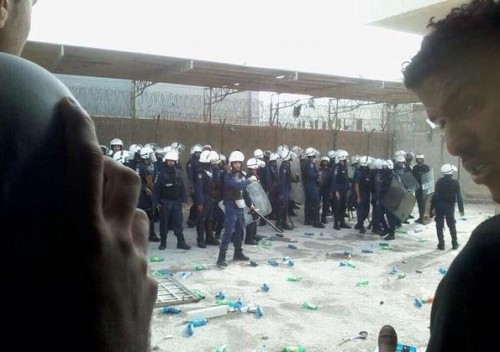 On the afternoon of April 17, there were frequent complaints about the sudden crackdown by a security group on the detainees who have been protesting in Buildings 12 and 13 since the death of the victim of deliberate medical negligence, Abbas Malallah, and the repercussions of the incident are still taking place until the moment of writing this article.

Through a quick review of the official stances taken since the occurrence of this incident, the following is noted: Insisting on ending the protest of prisoners harshly despite the media interest in prison conditions; seeking - unusually quickly - the assistance of the Public Prosecution Office and the Prisoners and Detainees Rights Commission in order to imply commitment to technical measures that take into account the Police Code of Conduct; the statement of previous condemnation by the National Institution for Human Rights, which preceded their statement of conducting the visit through a tweet accusing the prisoners of carrying out acts that violate the executive regulations of the center.

It is certain that this is not the first case of internal unrest in prisons in Bahrain under the successive administrations. It is a prominent part of the biography of the Bahraini Minister of Interior, Sheikh Rashid Al Khalifa - headed the Interior Ministry for 17 years - who was rewarded for the violations of the Ministry of Interior with Royal Decree No. 34 / 2017 by the appointment of his son Sheikh Abdullah as ambassador to the United States of America in Washington.

The successive incidents also show that managing both the file of the detainees infected with COVID-19 and the task of ending the protest of prisoners on April 17, was referred - as usual - to provocative figures who have a bad record in dealing with detainees' cases. Some of these figures, for example, are: Head of Public Security, Lieutenant General Tariq Al-Hassan, (his name is included in any press conference about the announcement of discovering security cells that we used to hear complaints of torture from those accused of being part of them), Director General of the General Directorate of Reformation and Rehabilitation, Brigadier Abdul Salam Yousef Al-Arifi, (on February 12, 2017, he stood at a checkpoint to prevent families of extrajudicial-killing victims from seeing the bodies at the cemetery), Captain Ahmed Al-Ammadi, and Captain Mohamed Abdel-Hamid Maarouf.

As for the new incidents of unrest inside prisons, leaderships or security personnel were desperate to act as if they were members of the ruling party by resorting to the virtual code of conduct of ill-treatment. In the two contradictory behaviors (calming public opinion and suppressing prisoners), the security authorities were working to achieve the following goals:

1. Media measure: harnessing state institutions or those associated with them, such as the Ministry of Health, the National Institution for Human Rights, the Ombudsman, the Public Prosecution Office, Prisoners and Detainees Rights Commission, members of the Parliament and Shura Council, and government media, to adopt and emphasize the official narrative. It is noticed that all of these parties adopted a single content, which is what the Chief of Public Security, Tariq Al-Hassan, said in his press conference about prison conditions after the first cases of COVID-19 were announced. Due to all this harnessing, it is not a revelation to say that the local public opinion of the opposition has not trusted any official narrative issued by these parties related to the political crisis for many years. It is noted that there is a tone of anger in expressing the official position, for example: the statement of the Ombudsman used resentment terms such as "In order to prevent mishmash" and "the campaign of false information," and it invited the public to view its periodic reports to learn about the Ombudsman's mechanisms.

2. Limited releases. We have not been able to know all the details and what is the final percentage of political prisoners until this moment, but some of the releases were included under the alternative penal code, and most of them had spent three quarters of the detention period. Here we wonder: In light of the affirmation of the genuine and absolute right of prisoners of conscience to obtain full freedom and be compensated, why are they excluded from the implementation of "conditional release" - which is stipulated in Chapter Five of the Criminal Procedure Code for prisoners who have served three-quarters of the time - instead of restricting them by the arbitrary restrictions of alternative punishments, which applies to many prisoners?

3. Adopting the usual security assessment established by the security-policy makers in Bahrain in describing any movement calling for the just freedom of prisoners as having a non-national agenda. Therefore, hate speech is used in government media or on social media platforms.

4. Deliberately blacking out on the reality of the health conditions of those infected with COVID-19, and not disclosing the total number of infected people and close contacts.

5. Continuously following up the news published about prison conditions, and rushing to deny such news by the usual means, including a statement that may be issued by the Ministry of Interior.

6. Considering any internal prison protest a desire to break the prestige of the police and must be confronted with the imposition of corrective norms by obliging the detainees to waive their demands and accept the penalties imposed on the protest, such as being placed in solitary confinement or being prevented from communicating with the family.

How are past experiences used in suppressing detainees?

Going back to the human rights archive shows that the name of Captain Ahmed Al-Ammadi has emerged since 2013 in punishing political prisoners at the Dry Dock Prison for their hunger strike, moodily using the punishment of transferring the prisoner to solitary confinement, or raiding cells with police dogs after midnight. On August 20, 2014, the detainees at the Dry Dock Prison organized a hunger strike under the slogan "Stop torture in prisons." The name of Al-Ammadi was mentioned in the statement of the detainees, who specifically described the violations and mentioned the names of those involved in them. It was stated in their statement[1] at the time that torture continued through "beating detainees in various ways, insulting them, imprisoning them for several days in rooms and preventing them from using the toilet, constantly threating them by officers and police members, insulting the Shiite sect and the Holy Qur'an, in addition to torturing and insulting detainees in solitary confinement - in which detainees continue to be tortured daily, and they are forced to stand for 24 hours for several days, in addition, they have not been allowed to use the toilet for many hours since the month of Ramadan."

Also in 2015, a detainee at the Dry Dock Prison revealed in an interview published by Bahrain Mirror that Al-Ammadi is one of the officers who are very hated by prison guards because he is harsh.[2]

Moreover, in 2017, complaints continued from detainees at the Dry Dock Prison, including an indication that Al-Ammadi threatens them with solitary confinement if they ask to go to the hospital or receive medical treatment.

In April 2021, Al-Ammadi's name will reappear as one of the leaders of the security group that led the attack on the protesting prisoners at Jaw Central Prison. The return of this name again is a clear example of the extent of the policy of impunity that enabled such security members not only to create techniques of repression against detainees, but also to stand behind an incident that will remain the focus of attention of the international media and human rights institutions, regardless of any condemnations.

*Chairman of the Bahrain Forum for Human Rights