After 25 Days of Demands for their Release and Protection, Prisoners' Families Hold Sit-in at Ombudsman Office 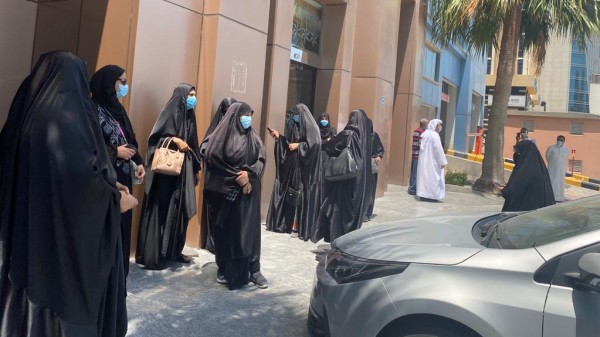 Bahrain Mirror: Twenty-five days after staging a sit-in outside the Ombudsman's Office last month (March 28, 2021), the families of prisoners returned today, Thursday (April 22, 2021) to hold a sit-in there.

It has been 26 days since the onset of the pandemic outbreak in Jaw Central Prison since the Ministry of Interior announced on March 27 that there were three cases of COVID-19 among Jaw prisoners. The spread is still increasing and the prisoners have been severely suppressed after making demands for improving their conditions, as well as protesting against the death of their fellow inmate Abbas Malallah, who died before their eyes due to the health negligence he suffered.

Despite the high temperatures and the fact that they were fasting, and some even suffering from chronic diseases, the families of prisoners did not hesitate to hold this sit-in. Families are worried about the lives of their children, with whom they have lost contact in Jaw Prison for more than two weeks, in addition to confirmation that prisoners in Ward 13 were subjected to brutal beatings by security forces, resulting in a number of serious injuries. The conditions of prisoners in Ward 12 are still unclear, as to whether they've been attacked by security forces first. The families demanded that they be able to make visual contact with their children to check on them. The Ministry of Interior still refuses to allow the prisoners to contact their families, and it refuses to give information on the status of prisoners infected with the Coronavirus.

The families are experiencing a dilemma since they cannot report their grievances to the Ombudsman's Office who declared on Wednesday (April 21, 2021) a biased stance against prisoners, supporting the Ministry of Interior's harsh measures against them.

It is noteworthy that peaceful marches and sit-ins have been ongoing in Bahrain calling for the release of prisoners, for at least 25 days.