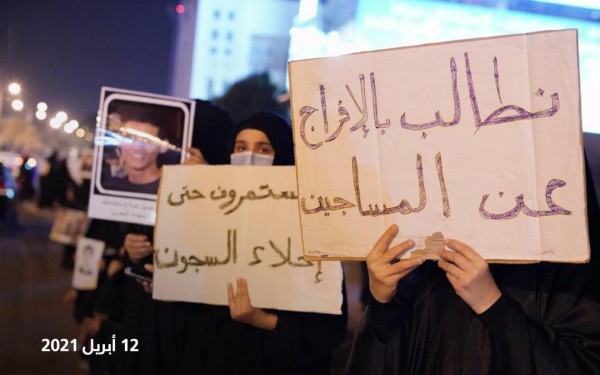 Bahrain Mirror (Exclusive): The families of political prisoners in Bahrain continued their peaceful protests for the consecutive sixteenth day, insistently demanding the release of their imprisoned family members, who have been suffering from injustice, the effects of the pandemic and medical negligence in Jaw Central Prison.

The National Islamic Al-Wefaq Society said on Monday (April 12, 2020) that the number of documented Coronavirus cases among prisoners has reached 92, according to Ministry of Health data.

Despite the release of about 60 political prisoners so far, according to the Bahrain Center for Human Rights, many are still behind bars.

King Hamad bin Isa Al Khalifa issued a decree pardoning 91 prisoners on the occasion of the blessed month of Ramadan, but activists haven't mentioned the inclusion of any political prisoners in this amnesty to date.

Families of prisoners took to the main streets of different regions across the country, holding up pictures of prisoners and banners calling for their release.

Prisoners of Conscience held in Jaw Prison have been experiencing difficult times, as multiple prisoners are now lying in hospital beds suffering from different diseases, not to mention the outbreak of the pandemic inside the prison.

On April 6th, 2021, prisoner Abbas Malallah was martyred, following the deterioration of his health. For the past ten years, the martyr had suffered from medical negligence that worsened his health condition, in addition to being severely affected by the withdrawal of the housing unit from his family, who as a result suffered immensely throughout the years.