Son of Former Bahraini Defense Minister Appointed as Ambassador to Israel: Why Should Al-Jalahma Accept this Dirty Task? 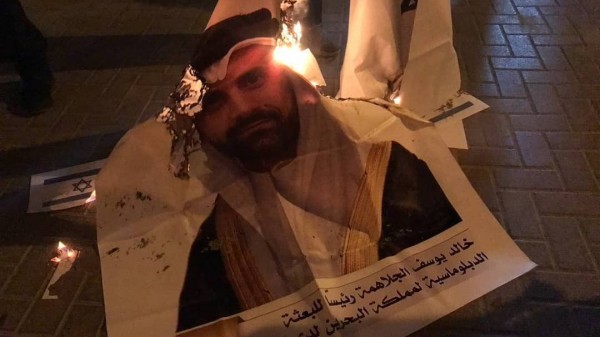 Bahrain Mirror (Exclusive): The King of Bahrain reintroduced the name of Al-Jalahma family through an aspect that isn't seen as honorable, which is the dirty work they take on. On March 30, 2021, the king appointed Khalid Yusuf Ahmed Al-Jalahma, 43, as ambassador to the Israeli entity after an agreement to normalize relations.

Media agencies that wrote about the ambassador's biography overlooked the three most significant information in his biography, much more important than his year of birth or education. The first is his family background, what his father represents, and what it means to put the name of Al-Jalahma family in the forefront, given the major conflict that it has recently experienced with the ruling family due to the fact that some of its family members and officers sought asylum in Qatar.

The biography of the ambassador in charge of the dirty mission seems very ordinary. As presented by the state media, he holds a bachelor's degree in literature from the Military College of South Carolina and he later obtained a master's degree in information systems from the American University in Washington.

As a person born to a loyal tribe, working in the military institution does not seem to be a major achievement. Al-Jalahma worked as an assistant project manager in information systems (Bahrain Defence Force) and then as project manager. He also served as director of government relations at the General Secretariat of the Supreme Defence Council, an institution that Bahraini citizens know nothing about the way it operates.

Al-Jalahma, who served as deputy head of the Embassy of Bahrain delegation in Washington for four years, served as head of projects and real estate at the Ministry of Foreign Affairs, then as an acting head of operations and follow-up, and finally as director of operations at the same ministry.

However, most important of all is knowing that Bahrain's first ambassador to the Israeli entity is the son of Former Bahraini Defence Minister Yusuf Ahmed Al-Jalahma. His father lost his job after the "Players with Fire" episode aired by Al-Jazeera Qatari channel (July 14, 2019), as the film marked an important milestone in the political polarization between Bahrain and Qatar and a major crisis between Al-Jalahma and Al Khalifa.

The film included an exclusive testimony of a Bahraini officer who led the military contingent that stormed the Pearl [Lualua] Roundabout in 2011, and led the troop to storm Al-Salmaniya Hospital. That former Bahraini officer was lt. Col. Yasser Athbi Al-Jalahma.

The former officer denied the ruling family's hypothesis of the use of lethal force against protesters at that time, he said "The demonstrators were unarmed". He added that security forces brought a number of weapons and took photos of them inside the roundabout area to accuse the protesters.

Shortly after the wave the episode caused, Commander-in-Chief of the Bahrain Defence Force Khalifa bin Ahmed Al Khalifa received the Minister of Defense affairs but as a retired officer. Minister Al-Jalahma was dismissed without an official announcement.

Five months later, particularly in December 2019, his post was given to an officer from Al-Nuaimi family, where Major General Abdullah bin Hassan Al-Nuaimi was appointed as minister of the Ministry of Defense Affairs, replacing Yusuf bin Ahmed Al-Jalahma, who was overthrown by the testimony of Yasser bin Athbi.

Al-Jalahma tribe's statement disowning the defected officer, who moved to live in Qatar along with a number of other family members, didn't benefit them. They started to receive high privileges.

It is true that the ruling family removed Al-Jalahma from his post as minister of defense, but gave him two symbolic positions, supervision of the National Space Science Agency and a membership in the supreme body of the Royal Fund for Fallen Servicemen.

This shows that the Al Khalifa family now faces two choices; either cautiously accept Al-Jalahma as an ally or lose them as an ally tribe in favor of Qatar. The same dilemma is being experienced by Al-Jalahma.

The Israeli entity has now a Bahraini ambassador. The ambassador has to now wipe out the waste of normalization with Israel and whitewash its crimes against the Palestinians. He has to now sleep with the occupiers only for the sole purpose of reassuring that his family is an obedient servant to Al Khalifa and then Netanyahu.