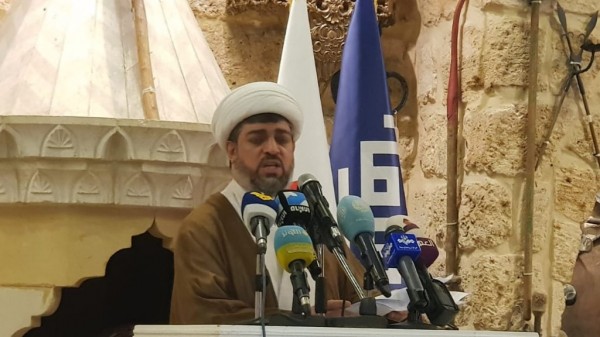 Bahrain Mirror: Al-Wefaq deputy Secretary-General, Sheikh Hussein Al-Daihi, held a press conference in Beirut, in coincidence with the Bahraini regime signing of the agreement of shame and normalization with the Israeli entity. Sheikh Al-Daihi delivered a speech during the conference in the name of the Bahraini people who are against normalization.

"On this black day in the history of our nation and our people, Bahrain lives in a state of mourning and anger over the heinous crime of stabbing the nation's central cause with the poisoned dagger of normalization by concluding an agreement to betray the Palestinian cause. This ominous day will be recorded in the black pages of history. What should be said is that the Bahraini regime is who normalized relations and exploited the cause, not the people of Bahrain," Al-Daihi said in his speech.

The following is his full speech:

The people of Bahrain tonight and at the moment of signing this ominous agreement, due to the security blockade and the complete ban on demonstrations, went up to the roofs and shouted "Allah is Great" and "Death to Israel" in the various regions of Bahrain. If the people of Bahrain had the opportunity to go out in demonstrations, you would have found the majority of them in protest squares denouncing normalization.

However, the repressive security machine that used all means to silence the people and suppress protests by force and brutality prevent them from doing so.

What about the decision's background?

In its plan to establish the project of normalization with the Zionist enemy, the Bahraini regime sought to justify this through its mouthpieces, citing false justifications. However, the truth is that there is a group of crises suffered by the countries allied to serve the Israeli occupation entity, and they are working on escaping from their internal crises, so their interests and that of the US administration and the Zionist entity met.

As a result of the crises accumulation, Trump is looking for electoral benefits, Netanyahu is besieged internally, politically, popularly, and judicially, the Bahraini regime is sinking in its crises - which will never end because the regime lacks legitimacy from the people and it dominates decision-making - and the Deal of the Century has failed, so the normalization agreements have become an alternative path to settle the Palestinian-Israeli conflict.

In addition, some Gulf States tend to openly normalize relations with the Zionist entity, believing that normalization helps them protect their security and bring them closer to Washington, regardless of the stance of their people who reject the relationship with the enemy.

These regimes are nothing but means to implement the major policies of the US administration. The US is seeking to achieve this alleged peace agreement to achieve a set of demands that are considered strategic and serve its endeavor to create a regional alliance that eases its security burdens and obligations in the region and confronts the forces opposing it, so that the US, then, concentrates its efforts in other regions in Southeast Asia and Eastern Europe.

In addition, through the conclusion of these agreements, the US is working on regional alignments, through which it wants to force Iran to change its policies in accordance with the US administration's goals to serve the Zionist interests. This was expressed by the Zionist Prime Minister, saying that the agreement with the UAE is part of the regional front against Iran. The truth is that the US wants to create an imaginary enemy, by which it intimidates the countries of the region to blackmail them and control their decisions and capabilities. From now on, the Zionist entity will be its striking arm in the region.

With these agreements, the Gulf region will become unsafe due to the presence of the Zionist entity and its security, economic and political empowerment. It will be a cause for destabilizing the region's security and stability.

This agreement will harm the status and role of some countries of the region and diminish their influence, as they voluntarily chose to abandon their historical leadership responsibilities towards the Palestinian people. After a while, it will become clear that this normalization agreement has harmed the countries of the region and did not achieve the desired stability.

The Bahraini regime relies, in signing this agreement, on reviving its collapsed economy by begging from some of the region's countries, but the people of Bahrain are proud, and do not beg at the expense of their principles and central causes. They will not accept the continuation of such a deflective path. Here, I am not predicting when I say that the regime will plunge into more of its security, economic and political crises, and this Zionist alliance will not be its rescue, but rather it will make it drown further in its crises.

While the regime extends its hand for the alleged reconciliation, peace and coexistence with the Zionist enemy, as it claims, it deliberately ignores its internal crisis with the Bahraini people, in which the regime used all means to strike coexistence and civil peace.

As for the Israeli occupation entity, it has promoted its success in concluding "agreements of shame under the slogan of peace" with Arab parties without the need to satisfy the Palestinians, which means that you, normalizers, are participating in imposing further isolation on the Palestinians. This explains your attack, through your press, on the Palestinian consensus rejecting normalization deals.

Here, we emphasize that the normalizing regimes, including the Bahraini regime, committed five crimes against the Palestinian cause through the path of normalization:

As for the stance:

Our stance on the Palestinian cause will remain a principled position based on the principles of our religion, our creed, humanity, and understanding of international conventions and human rights, and we will not deviate from that, and from the fact that Al-Quds is the eternal capital of Palestine.

We, as Bahrainis, are serious about confronting the project of normalization inside Bahrain, and we have a long-term program for that. They will fail and we will not fail.

We call for the formation of a broader Arab, Islamic and international coalition to confront normalization and support the Palestinian cause.

We, as Bahrainis, in response to the betrayal agreement between the regime and the Zionists, will work to prepare a Bahraini-Palestinian agreement that stipulates holding on to the Palestinian cause until the just demands of the Palestinian people are achieved.

In conclusion, based on historical experiences, we recall that the regimes that established relations with the Zionists were not provided with any sustainable protection by Israel during these years.

Lastly, may God have mercy on the martyrs and grant salvation to the prisoners and detainees and relief to the Palestinian and Bahraini people.