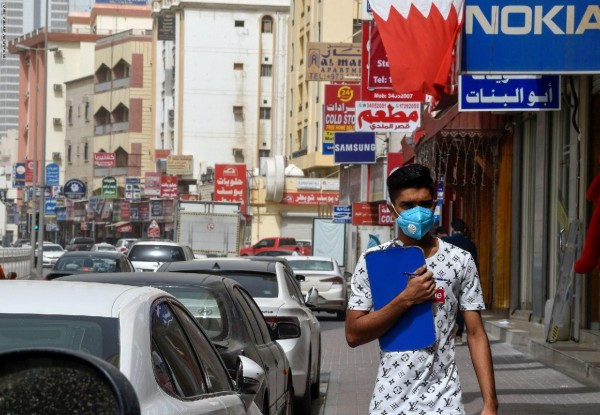 Bahrain Mirror (Exclusive): A statistical observatory predicts that new COVID-19 cases in Bahrain will continue to decline to less than 900 by August 26, 2020.

The observatory did not determine the mechanism of its estimates, but the number of new infections has declined relatively in the country over the past 10 days, to reach 3,247 today, while the number of cases admitted to intensive care units has also decreased to 41.

The total number of cases has broken the 40,000 record on Wednesday (July 29), with an increase of 5,000 cases within about two weeks. Meanwhile, the number of deceased reached 144. More than 5 months have passed since the discovery of the first case in the country on February 24, 2020.

The observatory, whose estimations were published in a local newspaper, said the total number of cases could reach around 50,000 on August 26. It also said that Qatar has the highest recovery rate among the Gulf States at 97%, followed by Bahrain at 91.46%. 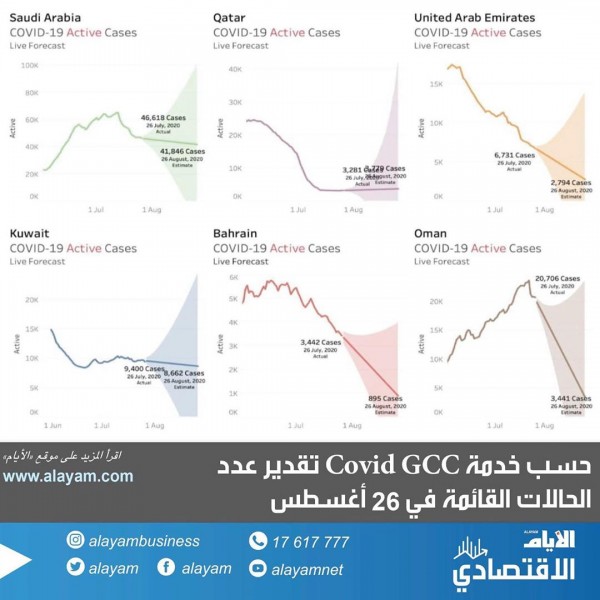 Bahrain and Qatar continue to be the world's leading countries with respect to the number of cases in terms of population. Studies attribute this high number to the poor conditions in which large numbers of foreign workers live in both countries.

An Associated Press report indicated that a dozen migrant workers sleep in a room in both countries.

A government committee set up to reduce the number of people living in Manama's labor housing buildings said it had reduced the number of workers in 475 buildings by 33% to 7,505 (which means that the number of residents was 23 per house).

Meanwhile, the Ministry of Health has produced a number of short videos, one in Hindi, to warn and educate the Asian community.

On the other hand, immediately after a relative decline in the number of cases, the Cabinet, headed by the Crown Prince, and then the Coordinating Committee, also chaired by him, was quick to announce a timetable for lifting restrictions on certain business activities.

In an accelerated batch of resolutions, the Coordinating Committee allowed swimming pools, outdoor stadiums and gyms to open from next week.

Meanwhile, in its last meeting on Monday, the Cabinet, headed by the Crown Prince, abdicated the responsibility of issuing a clear decision regarding schools, by throwing the ball in the parents' playground, given that all public and private schools are provided with the two options (attending school and distance learning), which will require exceptional equipment that has not been planned.

A day later, Tuesday's government (the coordinating committee at its first meeting also chaired by the Crown Prince) issued a preliminary decision to allow restaurants and cafés to open by the beginning of September, but only the open halls, while postponing the opening of indoor restaurant halls until September 24.

The government said the decision was not final and would be evaluated based on the developments of the epidemic. The rapid issuance of decisions reflects the government's need to reassure the commercial market and try to keep it standing, especially after several well-known restaurants and cafes announced the closure of their doors or some of their branches due to the heavy losses they suffered.

Health requirements for opening restaurants and cafés require a reduction of up to 75% of customers, while many small restaurants will not be able to welcome customers indoors, with the requirement to keep a 2-meter distance between tables and using only half the capacity of tables.

Meanwhile, the fate of the upcoming Ashura commemoration remains unknown, after the Supreme Council for Islamic Affairs decided to continue halting prayers and congregational worship rituals. However, the Jaffaria Waqf said it had considered the issue "in accordance with the visions of the Coordinating Committee" with "the Northern Province Security Committee".

On Wednesday, Hajj rituals started in Mecca with a limited number of people. Bahrainis reacted with great sadness to images of the pilgrims, which seemed to be an individual ritual, in which no Bahraini took part in this year.

The authorities warned citizens and residents against setting up Eid Al-Adha gatherings and reducing their numbers even among the same house, recalling the hike in the number of infections after Eid Al-Fitr. The state intensified its statements directed at citizens to abide by the measures and take responsibility for their families and others, in the language of advice, guidance and alerts, without issuing mandatory decisions in this regard.

The state seemed to severely suffer from poor communication with the public, amid a state of loss of confidence, in the absence of actors and influencers in people after the closure of political societies and limiting the actions of the religious institution in an intensive political crackdown 3 years ago.

Senior officials have been forced to come up with statements begging people to abide by the state's directives, and struggling to convince them to believe and trust them, starting with the Supreme Council of Health Chairman Mohammed bin Abdullah Al Khalifa, Minister of Health Faeqa Saleh, and Undersecretary Maryam Al-Hajri.

In a bizarre incident, a Bahraini court sentenced an infected person to 3 years in prison and fined him 1,000 dinars after he was convicted of deliberately coughing on doctors and attempting to deliberately transmit the virus to them.

However, the strangest incident was a statement by the Criminal Investigation administration that "questioning the state's ability to face the Coronavirus epidemic" on social media outlets is considered a crime. It claimed that this "crime" has been the most blatant electronic violation on social media outlets, documented during the past months.