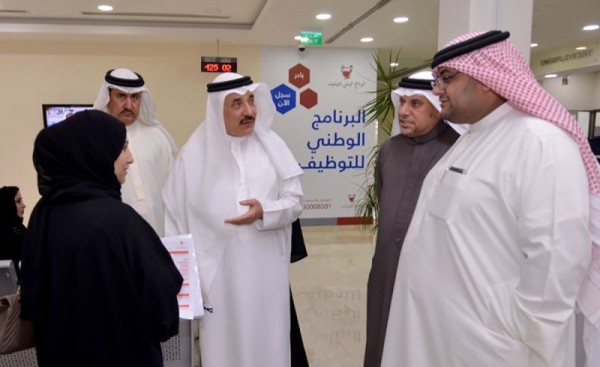 Bahrain Mirror (2019 Roundup): Whether it be titles, numbers, or decisions, they all clearly show that the authorities in Bahrain and the commercial sector prefer the foreign worker over the Bahraini citizen.

There is a real paradox in the official statements about the number of the unemployed. Labor Minister Jameel Hmaidan once said that the number of unemployed Bahrainis amounts to 5,000, and another time declares that they reached about 25,000, and then admits that 22,000 people have registered in the national employment project launched on February 25 to contain the worsening unemployment crisis.

The program didn't succeed in reducing the effects of the crisis ravaging the country. Instead, Minister Hmaidan continued to provide a false unemployment rate at 4.5%, while international estimates say that unemployment in Bahrain reached 18%.

There are 541 foreigners working for Alba in permanent jobs, while 542 Bahrainis work for the company on temporary contracts.

1,800 Bahrainis have left the Ministry of Health as part of the voluntary retirement program, while 21% of the ministry's foreign employees remained in their jobs. In the education sector, 6,434 of the best teachers left their jobs in the framework of the voluntary retirement program, while the ministry kept thousands of foreign teachers and staff.

In the Ministry of Works, there are more than 500 foreigners working with an average salary of 750 dinars, some of whom perform routine tasks that even high school graduates can manage to do, according to a number of MPs.

In the same context, the Minister of Interior announced on June 16, 2019 the launch of the national ambulance, after it was transferred from the Ministry of Health to the Interior Ministry. It turns out that foreigners were hired as paramedics and ambulance drivers, while Bahraini medics and drivers do not know what would become of their jobs. The whole sector was foreignized without accountability. This is the reality of the situation in this country.

The head of the Civil Service Bureau acknowledged at a parliamentary session that the approximate number of foreigners in the government sector amounts to 7,500 non-Bahraini employees and their cost is about 15% of the total expenditure estimates in the state budget. However, MP Ahmad Al-Salloum confirmed that the percentage of foreigners in the government increased to 28%, following the voluntary retirement program.

Bahrainization decreased in multiple sectors, including tourism, as it declined from 57% to 16% only.

To justify these policies, Chamber of Commerce President, Samir Nass, says that Bahrainis do not work in all fields. Meanwhile, "naturalized" businessman Yousef Mashal tells Bahrainis: "there's no feather on your heads and the government is not obliged to help you."

The government also continued to grant foreign workers who violate the conditions of residence the right to permanent residence in exchange for fees. According to official figures, 29,000 foreign workers have been legally granted residency.

For its part, the Shura Council rejected a proposal to oblige the government and commercial sectors to hire Bahrainis, and rejected another proposal requiring foreign workers to obtain a certificate of good conduct before being employed in Bahrain, while the law requires Bahrains to obtain this certificate.

All the House of Representatives members did was shout in the presence of the Minister of Labor, and when it came to discussing the policy of the Civil Service Bureau, the session ended with the scandal of voting against the proposal.

The legislative authorities publicly insult and disregard the sufferings of Bahrainis. The speaker of the House of Representatives swears that no one sleeps hungry in the country, while the speaker of the Shura Council mocks the fact that the poor in Bahrain own cars.