Sayyed Hasan Nasrallah: Price of Qasem Soleimani’s Assassination will be Expelling US Forces from Region 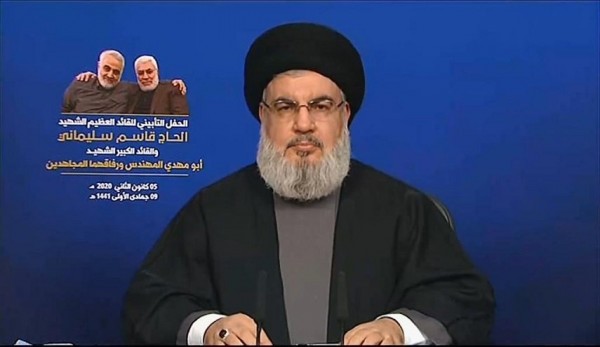 Bahrain Mirror: Hezbollah leader Sayyed Hassan Nasrallah said that expelling the American forces from the region will be the price of assassination of Irans Quds Force Commander Qasem Soleimani.

In a speech marking the martyrdom of Qasem Soleimani, Abu Mahdi Al-Muhandis and his companions, Nasrallah said that the response targets American soldiers and avoids American civilians working in the region.

"The American army is the one that killed them and it is the one that will pay the price," Nasrallah said, although U.S. civilians in the region "should not be touched" because this would serve the agenda of U.S. President Donald Trump.

"When the coffins of American soldiers and officers begin to be transported ... to the United States, Trump and his administration will realize that they have really lost the region and will lose the elections," Nasrallah said, referring to the 2020 U.S. presidential vote.