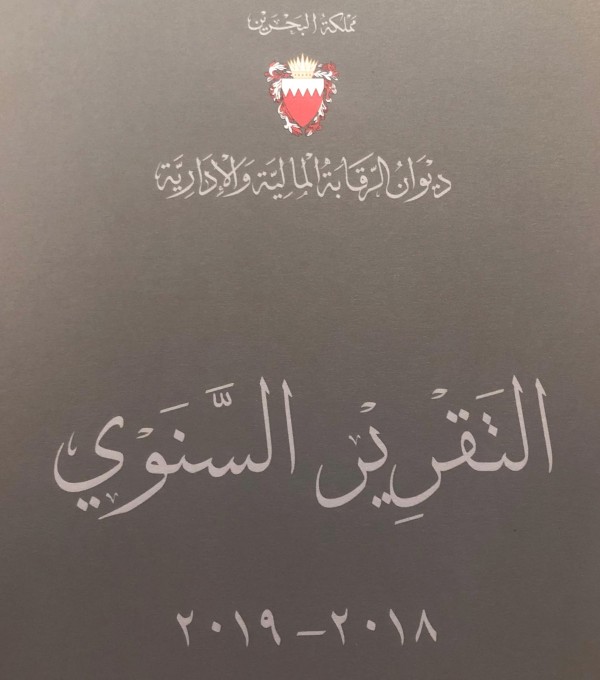 Bahrain Mirror: The National Islamic Al-Wefaq Society said that the report of the National Audit Office revealed information and figures exposing a small fraction of the evidence of rampant corruption in all state institutions and bodies.

The 16th report, issued for the 16th consecutive year, included dozens of cases involving most ministries and state agencies and institutions, with a systematic cover-up and non-mention of a number of other state bodies.

Al-Wefaq expressed its position towards this report, considering that the report hides essential parts of the real corruption in Bahrain, since it is issued by an official state institution that is part of the existing system of corruption from which it cannot be detached.

Al-Wefaq pointed out that the report has been issued for the 16th year without actually holding any official accountable. Despite the wastage and looting of billions, not a single official has been accountable for his actions and all officials and thieves have been safe of punishment, and the reason is because the corruption has been eating away the state from head to toe.

Al-Wefaq further explained that the report systematically and deliberately ignores mentioning the most important and prominent institutions that control public funds, which is the basis of the problem since they control the financial and political decisions in the authoritarian state.

It highlighted that the higher authorities involved in the source of corruption interfere in the methodology, preparation and supervision of the report, and are the ones responsible for the deletion, addition and drafting of the final report, rendering the report mere ink on paper, used as a political gain to show to international and domestic parties.

Al-Wefaq said that it believes the NAO needs to provide a set of conditions to be able to achieve effectiveness, influence and credibility, including: that the Audit Office should belong to a parliamentary council that enjoys full supervisory and financial authorities- a real council stemming from popular will and not a government council.

Holding the corrupt in the government accountable should be an available option and possible. This requires that the government be chosen, resulting from a democratic process that gives the people and parliament the right to hold it accountable for its corruption and violations, while a government imposed and placed by force over people cannot be held accountable.

The judiciary must be impartial and independent, chosen properly and professionally. However, if it has an absolute dependence on the government and exercises its role in the service of government, then it is natural that the judiciary is unable to play its role in holding corrupt people accountable, and instead becomes a direct supporter of corruption and looting of public money.

It called for the establishment of an Audit Bureau to be a substitute for the National Audit Office, which would be concerned with the transfer of all cases of corruption without exception to face legal accountability, working with the relevant institutions, especially towards the need for an impartial and independent judiciary.

Special courts shall be formed for trying corrupt persons without exception, similar to specialized courts in other fields, provided that they have independence and impartiality.

Al-Wefaq concluded its statement by saying that the success of any project for combating corruption and fighting wastage, rampant looting and encroachment on public money requires the redistribution of wealth, establishment of social justice, supervision of a real parliament and fair judiciary, and allowing public oversight of all the incomes and wealth.