On Prisoners of Conscience 10th Day of Strike, King Issues Royal Pardon for 250 Indian Prisoners in Honor of Narendra Modi 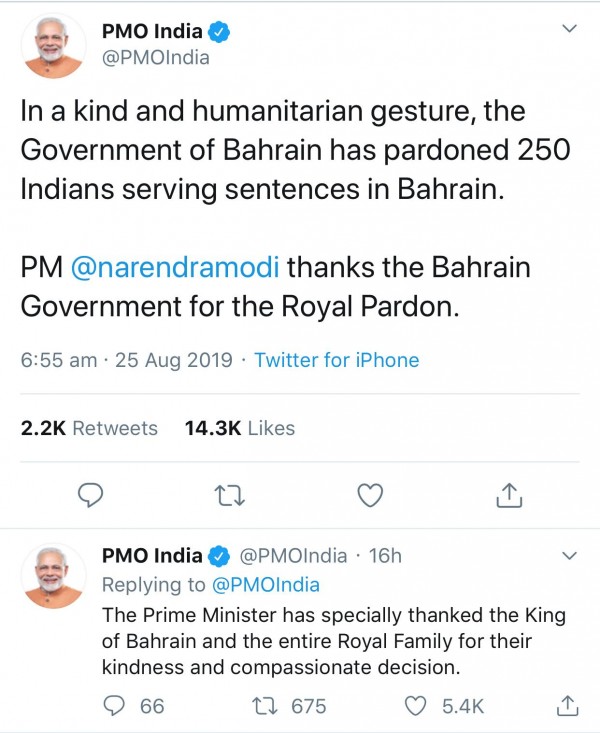 Bahrain Mirror (Exclusive): The photos of woeful women standing in front of the prison gates waiting to visit their sons, husbands, or brothers didn't stir the king's emotions. He didn't order stopping the humiliating searching they are subjected to. He didn't even listen to the appeals of children who called for their fathers' freedom on social media. Not even one political prisoner has been pardoned since 2011. However, the king decided to pardon on Sunday 250 Indian prisoners serving sentences in Bahrain, in honor of the Prime Minister who faces controversy over his anti-Muslim decisions.

The Indian Prime Minister Narendra Modi extended his thanks, via his Twitter account, to the political leadership in Bahrain for pardoning 250 Indian prisoners, deeming it a humanitarian gesture.

The Indian PM especially thanked the "king of Bahrain and the entire Royal family for their kindness and compassionate decision".

Around 600 political prisoners in Bahrain have been on hunger strike for more than 10 days, demanding better humanitarian conditions and treatment of ill prisoners, but the Ministry of Interior's response to them has been very harsh. A number of activists reported on Sunday that the Jaw prison administration has separated the strikers from the rest of the prisoners, handcuffed them from behind, beat, and treated them violently, despite the prisoners' fatigueness from the strike. Some of the prisoners lost consciousness and some were transferred to the prison's clinic, which lacks necessary medical means.

According to numbers released by human rights activists, there are more than 5,000 political prisoners in Bahraini prisons and the King of Bahrain has not pardoned any of them, even though some of them suffer from serious diseases such as cancer. There are also a number of detainees in Isa Town Women's Detention Centre, whom international human rights organizations have appealed the king to release, yet these appeals have received no response to date.