Why Are Bahrain’s Prisoners Entering the Hunger Strike Battle? 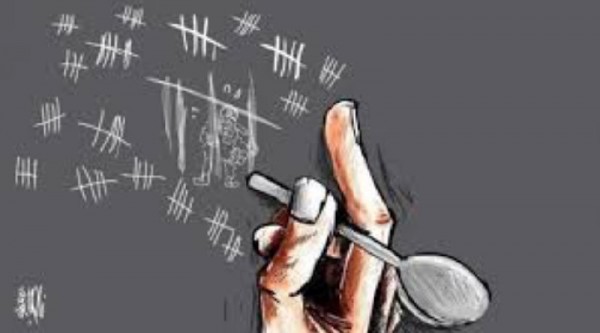 Bahrain Mirror (Exclusive): "It is said that no one truly knows a nation until one has been inside its jails. A nation should not be judged by how it treats its highest citizens, but its lowest ones," says Nelson Mandela.

We tell Mandela that if the regime in Bahrain gives its citizens outside its jails the lowest treatment, then how would it treat those inside prisons if it deems them its enemies?

However, not everyone inside Bahraini prisons are the "lowest citizens". Prisons are crowded with activists, academics, media people, political leaders, clerics and others. Sources say that there are almost 5,000 political prisoners in Bahrain living in degrading conditions.

What made all of these prisoners enter the hunger strike battle? What made them endure hunger and what made the prison's administration threaten them with imposing further serious measures against them?

The political prisoners, who are being treated like animals, are living in crowded cells; they eat the worst food and drink dirty water. They are being humiliated, beaten and degraded.

It all started with the isolated prisoners of conscience who complained about being placed with criminals who don't share their language, religion and culture, and harassed for practicing their religious rituals. They demanded to be put where they belong with the rest of prisoners who announced their solidarity with them, before the number of prisoners increased to reach 600 demanding to ameliorate their situation inside the prison.

There are no announced demands by the rest of the prisoners on hunger strike yet. However, families of detainees have always talked about the miserable conditions inside the prison such as the bad and spoiled food offered to the prisoners. "We have two choices, either to die of hunger or get food poisoned," prisoners tell their families. "Save us, the food given to us is inedible due to its bad smell. We are hungry and the food comes in small quantities...Isn't it enough that the food is bad and the plates are filthy!"

Water in prison has a different story. It lacks all of its known physical properties inside the prison: water is colorless, tasteless and odorless. In prison; however, water has a color, a bad taste and stinky smell. As for the bottles used for drinking, they are as Dr. Taha Al-Dirazi said in a tweet: "Save_Prisoners_of_Bahrain. They drink water in Clorox bottles and eat their meals on nylon bags instead of plates. They spend 23 hours in prison cells."

When some people condemned what he said, Al-Dirazi responded by saying: "I won't answer those who condemned the tweet and dubbed me a liar. They claimed it is a 5-star prison. If I hadn't been held there and didn't go through this suffering, I wouldn't have spoken."

The prisoners who are crowded in the same prison cell and whose number exceeds that of beds also suffer from restrictions in visits, as the number of relatives allowed to pay visits has been reduced, and restrictions in practicing their religious rituals.

Al-Wefaq society issued a statement in solidarity with the prisoners' strike in which it said that "The regime practices harassment, oppression and deprivation by continuing the degrading treatment, prohibiting medical treatment and detaining prisoners in isolation, which are places of punishment that are devoid of any sense of humanity."

"Sources inside the prison reported that those who prayed in congregation or recited a du'aa (prayer) were punished by solitary confinement even if they had a security permission to practice this."

"As for the deprivation of treatment, there are severe and serious cases. Some are exposed to conditions that forced some prisoners to pull their teeth in primitive ways with the help of other inmates, without local anesthesia or appropriate health conditions," it added.

500 political prisoners in Bahrain are suffering from oppressive and inhumane conditions, 600 of whom are on hunger strike. They demand the prison's administration to enhance their conditions or they'll die of hunger one after the other. This is Bahrain for those who don't know.