What was Former MP Osama Al-Tamimi Subjected to at the CID? 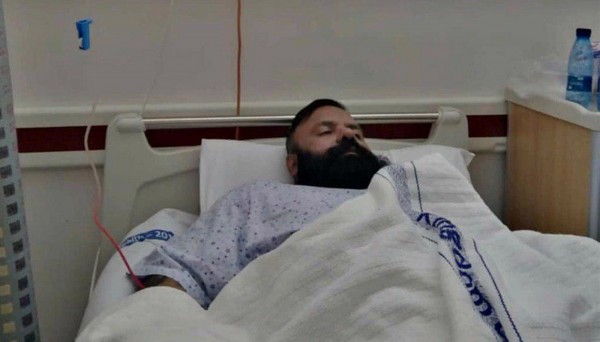 Bahrain Mirror (Exclusive): No one knows what former MP Osama Al-Tamimi was subjected to after the authorities arbitrarily arrested him by breaking into his home on August 6, 2019. No one knows what Al-Tamimi faced during the five days in detention, when no news was reported on him, before his photo at Al-Salmaniya Medical Complex was circulated on August 11, showing him lying in a bed suffering a brain stroke. Al-Tamimi didn't suffer any disease; he was an experienced athlete and is an owner of a well-known gym, according to human rights activist Ibtisam Al-Sayegh.

Al-Tamimi's situation completely changed within 5 days. He became incapable of talking, bound to a wheelchair with a heavy tongue. What did he face at the Criminal Investigation Department (CID) that to cause him this severe condition? There's no available information, since Al-Tamimi is incapable of speaking.

The Interior Ministry published a statement following his arrest stating that a former MP was arrested on the basis of an arrest warrant issued by the Public Prosecution in a forgery case. The statement coincided with unofficial leaking of allegations that he is accused of setting his gym on fire in an attempt to obtain insurance sums amounting up to millions of dinars. However, the ministry remained silent after the detainee suffered a brain stroke and pulled out the security guard from his room.

This came more than a month after Al-Tamimi resorted to the U.S. Embassy for protection on June 15, 2019, fearing for his life and his family members' lives. He told the embassy security that his request came after he was subjected to constant targeting, persecution and threats by the authorities, specifically members of the Bahraini Ministry of Interior. The most recent was being pursued by civilian forces who forced him to get out of his car and threatened him. Al-Tamimi submitted a request to the Embassy to take him out of Bahrain out of fear for his life and his family members' lives, however, the embassy rejected his request.

Al-Tamimi was not immediately arrested after resorting to the embassy; however, he suddenly became wanted in a forgery case.

Al-Tamimi insisted, despite his alarming health condition, to sign papers to leave Al-Salmaniya Medical Complex on his full responsibility, amid the doctors refusal and family concerns. As soon as the security guard disappeared from his room, he decided to leave the hospital despite his inability to move and speak, and then his family transferred him to a private hospital.

Al-Tamimi was known for his critical  political views of the authorities' policies. The first position that drew the attention of Bahrainis is his boldness in criticizing corruption. He accused "the royal family of stealing 50% of Bahrain's lands" during a sit-in staged by the residents of Riffa and Isa Town in January 2012 protesting the Al-Buhair housing project.

He paid the price for expressing his courageous humanitarian stances and criticism of the authorities, as well as his rejection of abuses against political prisoners since 2011 and his filing of a judicial complaint against Bahrain's minister of interior, minister of justice and the public prosecutor. His punishment for that was having his establishment fired at, shattering its glass facade, and then his membership in the parliament was withdrawn on May 20, 2014 in a secret session held by the House of Representatives by 31 votes.