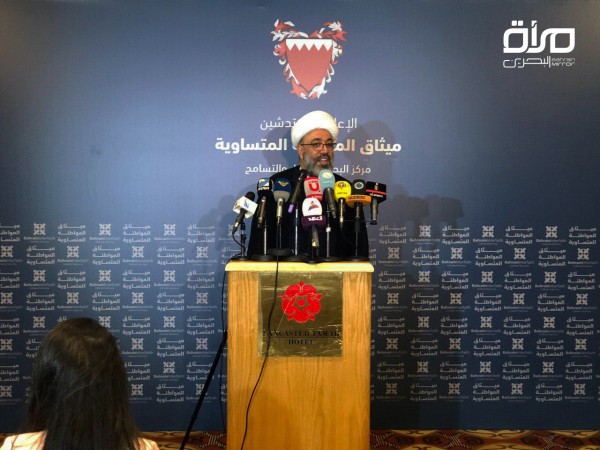 Bahrain Mirror (Exclusive): Bahrain Interfaith Center launched the "Charter of Equal Citizenship" in Bahrain at a conference held on Friday in the Lebanese capital, Beirut. Speaking on behalf of the Center, Sheikh Maytham Al-Salman said that a number of steps in this project will be taken in the upcoming months. He wished civil society organizations to cooperate despite the stifling conditions in Bahrain, either directly or through international organizations, in order to reach a consensus on a roadmap, for the purpose of promoting national consensus and equal citizenship.

Al-Salman highlighted that Bahrain is in need of a major project to address the citizenship crisis that guarantees citizenship for all, also announcing on behalf of Bahrain Center for Human Rights (BCHR) the launch of a draft Equal Citizenship Charter, which he hopes will come to be in the beginning of next year.

Al-Salman called on all parties to participate in the drafting of this charter, including state bodies, not by relying on sectarian or class-related factors, but by referring to international resolutions regarding the commitment of states to the principle of equality, including the Universal Declaration of Human Rights and international conventions to abolish all forms of discrimination, as well as other international agreements.

Sheikh Maytham Al-Salman appealed to all components of the homeland, stressing that "Bahrain will not enjoy sustainable political and social stability unless it promotes equal citizenship before the judiciary, which would be fair to all components regardless of human differences."

"After eight years of political, humanitarian and societal crisis in Bahrain, deterioration of freedoms, total absence of the principles ​​of equal citizenship, domination of the language of discrimination and classism and the persistence of hate speech and rejection of the other, international calls and urgent local demands to build an equal citizenship state and adopt the language of dialogue and the integration of all components of Bahraini society, in addition to the attempts aiming to stop all projects of marginalization, discrimination, segregation and targeting, did not stop," he stressed.

He noted that Bahraini authorities announced the formation of the National Committee for the Promotion of National Belonging and Preservation of National Identity in December 2018, adding that some details were announced in March 2019 and details of this plan were presented in August 2019.

Head of Bahrain Interfaith also assured that the announcement of the details was a great shock to the local and international community regarding the extent of carelessness by the government towards the issue of equal citizenship, their denial of the crisis and their insistence on the language of marginalization and suppression of freedoms.

Al-Salman further pointed out that the initiatives and actions included in the plan were either farcical, marginal or did not reflect the reality of the problem, adding that they were overshadowed by the lack of seriousness in dealing with reality and the intentional omission of the truth in order to dismiss the real problems. "The ideas put forward will contribute to further constraints and measures that will increase authoritarianism, spread fear and remove stability."

He went on to say that "the magnitude of the problem in Bahrain has crossed the line and gone too far that citizens are feeling the absence of the state, independent authorities, real institutions or/and a fair law that can alleviate the grievances of citizens," stressing that "Bahrain today is one of the worst countries in the world in terms of violating the foundations of citizenship," since the crisis is becoming more complicated and its societal and political ramifications have become heavier, including the existence of "super citizens" and class-four citizens, in reference to the systematic discrimination that the Bahraini Shia face.

Al-Salman also stressed that Bahrain's Shiites and Sunnis do not need lessons in patriotism, explaining that "the governing party has no other choice but to seriously return to the state, independent authorities and active institutions that constitute the guarantee for a society with equal rights and duties."

Sheikh Maytham Al-Salman expressed the urgent need in Bahrain to allow an international team specialized in issues of racial discrimination and absence of principles of equality to visit Bahrain and help all parties reach consensus and draw up a roadmap to shift to an equal citizenship state, adding that "the people in Bahrain are complaining about the absence of the state and independent judiciary and the rampant tribal, regional, ethnic and sectarian discrimination in all parts of the country."