Hezbollah S-G Nasrallah: Bahraini Regime on Board American Boat, Ready to Go to End with Israel 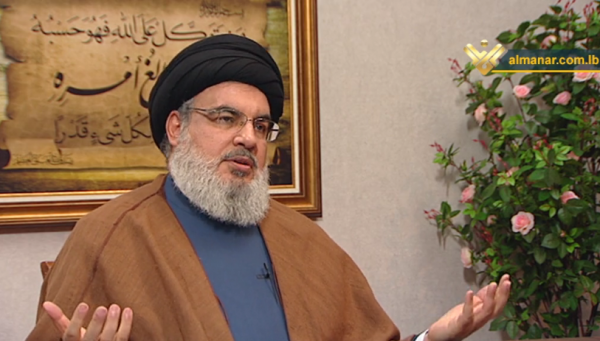 Bahrain Mirror: Hezbollah Secretary General Sayyed Hassan Nasrallah said that Bahrain's hosting of the economic workshop on the so-called "Deal of the Century" came at a Saudi request, since the Saudi Crown Prince Mohammed bin Salman does not dare to hold the workshop in Riyadh or Jeddah.

In a Friday interview with Al-Manar channel, Sayyed Nasrallah added that the Bahraini regime is no longer concerned with anything called Arab, Islamic, holy or Al-Quds rights, to the extent that Israeli Prime Minister, Netanyahu, proudly quoted the Bahraini Foreign Minister's statements.

The regime in Bahrain had no problem hosting the workshop, since it no longer has Arab values. With regard to the Israeli matter, the regime rode in the American boat and is ready to go to the end.

Nasrallah concluded his comments by saying that what the Bahraini regime says about the Palestinians and their rights is "shameful.''