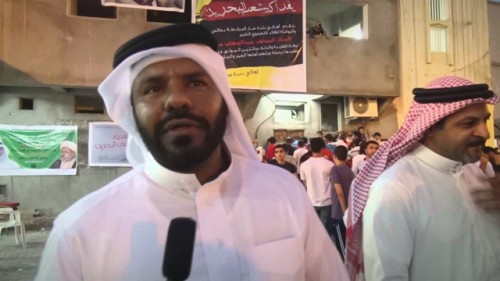 Bahrain Mirror (Exclusive): The Bahraini authorities must immediately end ongoing harassment, intimidation and attack against former Member of Parliament Osama Muhana Al-Tamimi, who is known for his criticism of the government, Amnesty International said today.

"Osama Muhana Al-Tamimi is one of the few openly critical Sunni voices in Bahrain. His harassment comes as no surprise, and serves as a stark reminder of the ongoing, multi-faceted means the authorities have been resorting to, to silence any independent thinking in the Kingdom," said Lynn Maalouf, Amnesty International's Middle East Director of Research.

Osama Muhana Al-Tamimi entered Bahrain's Council of Representatives after a by-election in October 2011. In a speech in parliament in April 2012, he called for the resignation of Prime Minister Khalifah bin Salman Al Khalifah. On 11 February 2014, he called for the release of prisoner of conscience Nabeel Rajab, the Shi'a head of the Bahrain Center for Human Rights.

In November 2016, Al-Tamimi was sentenced to a month in prison for "insulting" a police officer. Upon his release after completing his sentence in 2017, the authorities compelled him to pay a "fee" of over US$66,000 to the Al-Hoora police station.

Al-Tamimi's harassment and intimidation comes in the context of heightened rhetoric by the authorities, who have threatened to arrest and prosecute those who criticize the government, especially through social media.

"Too many Bahraini citizens are paying a hefty price for voicing their opinion in the Kingdom. The authorities' crackdown will not make the issues they are raising disappear, but only continue to fuel resentment and deepen the divide between citizens and their state," said Lynn Maalouf.

"Bahrain's allies, namely the UK and the US, should pay heed to the consequences of this repression and pressure the Bahraini authorities to reverse this appalling pattern of silencing peaceful critics like Al-Tamimi."