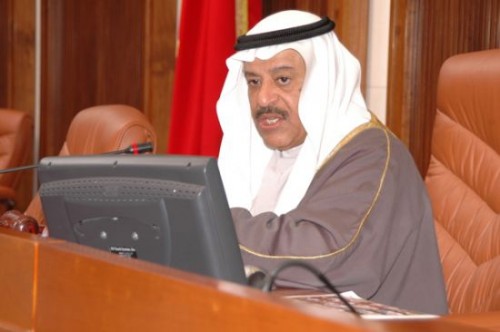 Bahrain Mirror (Exclusive): Many decades may pass without the Bahraini people, especially the poor, hearing such a cynical laugh at their poverty and need, the laughter of the speaker of the Shura Council Ali Saleh Al-Saleh.

It was a sarcastic laugh at the fact that they are human beings who need to travel by car in a hot country, a country whose government has not provided public transport of good quality that would save them the cost of purchasing a vehicle and bearing its monthly expenses and annual insurance.

"A poor person can buy a car! How poor that person is!", Al-Saleh said, followed by a mocking laugh. The Shura Council speaker's comment came as a response to Mona Al-Mu'ayed who said that tax revenue (150 million dinars) will be collected from the pockets of the poor.

This offensive laughter came from a person who heads a legislative council that "represents the people", but the fact is that Al-Saleh does need the people, and only needs one person, i.e. the king, who appoints him as a member of a parliament, where half is appointed and the other half elected. This is precisely the point to which Bahrainis object in the 2002 Constitution, issued by the King unilaterally. The foundation of most of the country's affliction is: the lack of popular partnership in the political or economic decision-making process.

Bahrain's rulers and financiers do not like the poor, except for those who applaud and dance in election weddings. After the elections and slogans like "with your vote, you can" and "duty calls," the likes of Ali Al-Saleh spouts the truth- how the higher authority views of the nation's people, especially the poor.

These expressions are not the first and will not be the last, from the contempt of Sawsan Al-Shaer for Bahrainis, Minister Zayed Al-Zayani's multiple comments, to Ali Saleh Al-Saleh's words.

Fawzia Zainal, who also runs a sham council, swore that there are no poor people who sleep hungry in Bahrain, just a week before Al-Saleh's sarcastic chuckle. This prompted many responses, especially from officials of charity organizations.

The common view among the likes of Al-Saleh and Fawzia Zainal is that the poor have themselves to blame for the cause of their poverty, and that due to their foolishness and laziness they have rendered themselves poor. Instead of pointing fingers at the poor of their country, the wealthy should realize that the productivity of individuals in rich countries is more because of the nature of the adopted system, not because of the nature of individuals and their extraordinary abilities. People in rich countries do not excel hundreds of times more productively than their counterparts in poorer countries because they are more talented or more educated. It is because they live in economies that enjoy better techniques, more organized institutions and better financial infrastructure- all these are factors produced by the collective actions and efforts throughout past generations.

This is in addition to the fact that when the rich in poor countries support the survival of corrupt regimes in positions of power and back wrong political and economic conditions, they benefit from that alone, for they in fact bear the brunt of their country's underdevelopment far more than anyone else.