Health Situation of Haq S-G Deteriorates Again, His Son Protests to Save his Father's Life 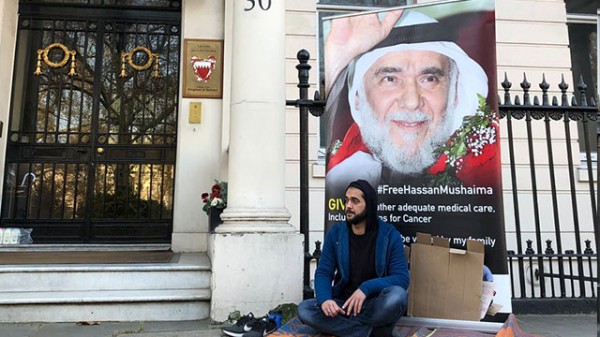 Bahrain Mirror: The health conditions of Secretary-General of Haq Movement, Hasan Mushaima, who is serving a life sentence for demanding democracy, deteriorated again. As a result, his son, a London-based activist, protested again in front of the Bahraini embassy in order to save his father's life.

Ali Mushaima announced on Tuesday that his next protest will be held at the hose track in Windsor, where the king attends the race every year.

It is to mention that Ali Mushaima indicated earlier that his father is still waiting for the result of the cancer disease test he underwent over 7 months ago.

He said "I will be fasting and protesting on the street. The world must know that my 71-year old father in Bahrain doesn't get half the treatment that those horses are granted."

Ali Mushaima has one again protested in front of the Bahraini Embassy in London. He said via his Twitter account that he finds himself having to come back to the embassy to protest in order to save his father, Hasan Mushaima, who is being denied treatment at the notorious Jaw Central Prison.

He said: "Our feeling that there is a plotted intention to kill my father has been confirmed. Denying a 71-year-old man of treatment is considered a crime."

Ali Mushaima indicated that his imprisoned father "needs to be examined every 6 months and that he is not allowed to meet doctors to check on his chronic diseases."

Amnesty International said that the Bahraini authorities have again imposed unjustified use shackles on Hasan Mushaima in case he wants to go to receive treatment in the hospital.

His son Ali Mushaima said that "Jaw prison administration has blackmailed my father and bargained with him to offer him treatment only under the condition of chaining him with humiliating shackles, contrary to the statement of the Bahraini Embassy in London that he will be taken to his medical appointments without humiliating shackles due to his special circumstances."

The Secretary-General of Haq Movement, Hasan Mushaima, is one of the most prominent opposition figures detained since 2011 over demanding democracy. He is facing a life sentence over his political views and has been denied, for nearly two years, his right to treatment, tests for the cancer he suffered from as well as receiving chronic disease medications.