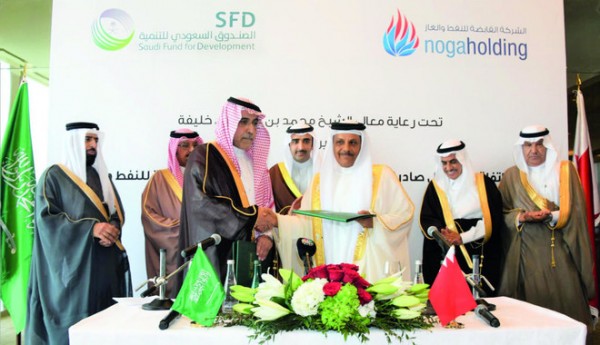 Bahrain Mirror: Saudi Arabia and Bahrain, two representatives of the Saudi Fund for Development, and the Bahraini Oil and Gas Holding Company signed an agreement to fund oil and gas projects in Bahrain worth $300 million, in the presence of Oil Minister Mohammed bin Khalifa Al Khalifa.

The agreement, from the Bahraini side, was signed by the CEO of the Company, Dhafer Al-Jalahma, and the Vice President and Managing Director of the Saudi Fund for Development Khalid bin Sulaiman Al Khudairy.

The Oil Minister praised the role played by the Saudi Fund for Development in contributing to the financing of the various priority development projects of the Bahraini government, pointing out that the agreement aims at financing the needs of the Oil and Gas Holding Company, including manufacturing products in the oil and gas sector in the Kingdom, which would work towards the development of the oil sector in Bahrain.

He highlighted that the National Oil and Gas Authority and the companies under its umbrella have witnessed numerous efforts and initiatives by the oil companies affiliated with the Authority, which resulted in the establishment of several oil projects, including the modernization project of the Bahrain refinery, which is considered one of the largest oil projects with a capacity estimated at 358,000 barrels, worth six billion USD.