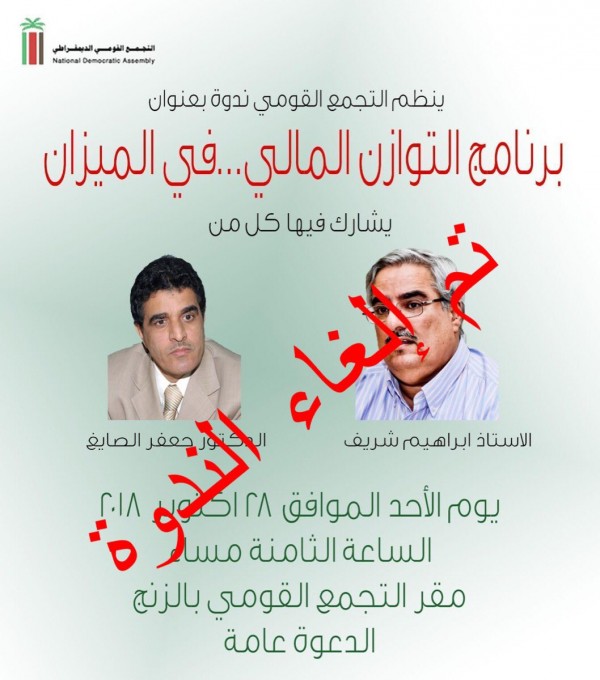 Bahrain Mirror: The Nationalist Democratic Assembly announced the cancellation of a seminar after pressure from the Bahraini Ministry of Justice and Islamic Affairs, which demanded preventing opposition leader Ibrahim Sharif's participation in the event.

A number of activists circulated a text message they received on Sunday (October 28, 2018) that read: "The General Secretariat of the Nationalist Assembly announces the cancellation of a seminar on the financial balance program tonight because of the Ministry of Justice's request in a phone call with the  Assembly's secretary-general to cancel the participation of Mr. Ibrahim Sharif in the seminar."

Opposition figures in Bahrain have been subjected to tight measures taken to clamp down on their activity. The authorities also exercise political isolation against the opposition, as dissidents have been banned from running for elections and from membership in any civil institutions or sports clubs.

Ibrahim Sharif was the secretary-general of the opposition Wa'ad Society up until he was arrested on March 17, 2011. He was tortured at the hands of the security services and imprisoned for five years.

After his prison term ended and his his short-lived release, the authorities took him into custody again and imprisoned him for one year. Wa'ad was dissolved after that and its leaders and members were banned from practicing political work or running for elections.