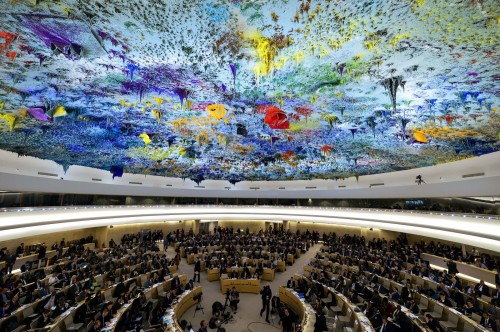 Bahrain Mirror: Bahrain, Cameroon and the Philippines were among a number of nations controversially elected to the United Nations Human Rights Council on Friday, sparking sharp criticism from rights groups and the United States.

Around a third of seats on the 47-member council, based in Geneva, were open for slots lasting from 2019-2022. A 97-vote majority from the 193 nations that make up the UN's General Assembly is needed for approval.

For the first time since the council was created in 2006, each voting region agreed in advance on 18 candidates to be in the running for 18 seats -- removing any competition.

New members Bahrain, Cameroon, the Philippines, Somalia, Bangladesh and Eritrea were elected with between 160 and 178 votes -- and immediately drew criticism from activists in Europe and North America dismissing them as "unqualified" due to their human rights records.

Louis Charbonneau, the group's UN director, called the vote "ridiculous" and said on Twitter it "makes mockery of (the) word 'election.'"

At the start of the voting session, the General Assembly's president, Maria Fernanda Espinosa, noted that every member state is allowed to apply for a seat.

Her spokesman later declined to directly address the criticism, but instead noted: "It's clear that the world expects that members of international bodies will abide to a certain set of standards of behavior consistent with the bodies they have been elected to."

Five of the new members were from Africa, five from Asia, two from eastern Europe, three from Latin America and the Caribbean, and three from western Europe.

The United States pulled out of the council in June, calling the organization a "hypocritical" body that "makes a mockery of human rights," in particular in regard to its stance on Israel.

Nikki Haley, who this week announced her resignation as US ambassador to the UN, said Friday's vote demonstrates why the US was right to withdraw.

"Yet again, countries with poor human rights records ran uncontested. This lack of standards continues to undermine the organization," she said.

"The United States will continue to support reforms that would make the Human Rights Council credible."