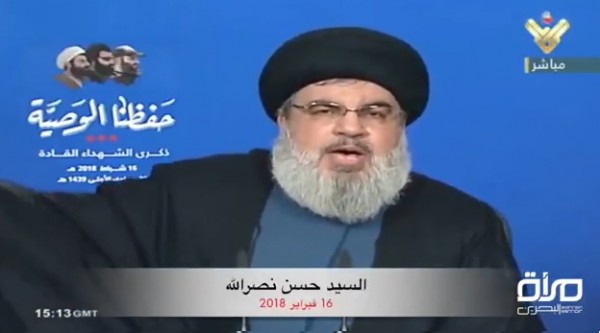 Bahrain Mirror: Hezbollah Secretary General Sayed Hassan Nasrallah warned of the danger of demographic change in Bahrain through the extensive naturalization policy adopted by the Bahraini authorities, stressing that he stands by the people of Bahrain and their demands, on the seventh anniversary of the February 14 uprising.

In a speech addressing a crowd of supporters at the Sayyid Al-Shouhadaa Compound in the southern suburbs of Beirut, Sayed Nasrallah said that the Bahraini people remained steadfast and challenged the authorities despite the house arrest imposed on Ayatollah Sheikh Isa Qassim, and the fact that clerics, opposition leaders and thousands of youths remain behind bars, highlighting that "the demonstrations did not stop". "I tell you that these people did not stop not after 7 years, 8 nor 10 years, and they are adamant to achieve their legitimate demands".

Nasrallah pointed to a "very dangerous" issue, i.e. the demographic change project taking place in Bahrain, which seems more like an "Israeli project", he said.

He further stated that Bahrain is the only country in the world that punishes by revoking the nationalities of the indigenous people of Bahrain, while naturalizing people from all over the world. "The issue is that the [people in the] government and the authorities that withdraw the nationalities of the native Bahrainis are not indigenous themselves, but were brought to Bahrain to rule it."

Concluding his speech, Nasrallah reiterated his solidarity with and support for the oppressed and persecuted Bahraini people.