Bahrain Representative Upset by Denmark & Ireland Statements in Geneva: They Attack our HR Record with No Regard for our Explanations 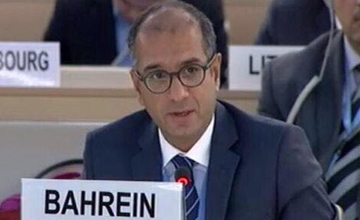 Bahrain Mirror: The Permanent Representative of the Kingdom of Bahrain at the United Nations in Geneva, Yousef Abdul Karim Bucheeri, expressed his dissatisfaction with the Danish and Irish statements, accusing them of using the forum of the UN Human Rights Council to "attack Bahrain and its human rights record without taking into account all the clarifications and explanations presented by Bahrain on many occasions."

The ambassador reiterated his country's claims that Bahrain's constitution guarantees "the rights to freedom of opinion and expression, peaceful assembly and to association in accordance with international standards [...] It is not just to force any government to exempt anyone from having the law implemented on them for their mere popularity and fame."

"Bahrain will not allow, in any way, under any circumstances, the targeting of its human rights record and developments made regarding this issue day in and day out, and will not tolerate any futile attempts aimed at putting Bahrain in a bad light, and reading its [human rights record] in a negative and distorted fashion."