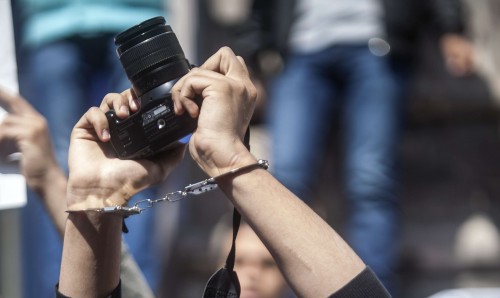 Bahrain Mirror: Associated Press, Agence France-Presse, and other organizations including the Committee to Protect Journalists (CPJ), addressed a letter to Bahrain King Hamad bin Isa Al Khalifa, calling on him to allow journalists to operate freely in the country.

Bahrain has refused to grant accreditation to several of its own citizens who report for foreign and independent media.

The organizations who signed the letter said, "In an April 27 letter sent to Rifaa Palace and the Bahraini Embassy in Washington, D.C., the Committee to Protect Journalists joined news agencies and press freedom organizations in calling on King Hamad bin Isa al-Khalifa to allow journalists to operate freely in the country." They, however, received no response, and therefore published the letter Thursday (May 4, 2017).

"Bahrain has over the past year refused to grant accreditation to several of its own citizens who report for foreign and independent media, including those working for The Associated Press, Agence France-Presse, France 24, and Monte Carlo Doualiya," the letter stated. It noted that among the Bahraini journalists refused a routine accreditation renewal, Nazeeha Saeed, now faces prosecution for continuing to work.

Moreover, the letter noted that "As recently as last month, Mohammed Al-Shaikh, who worked as a photographer for Agence France-Presse until Bahraini authorities refused to renew his accreditation last year, was arrested upon his return from a trip overseas and held for more than 24 hours over his work for AFP."

It further recalled that "for several days in January, the government of Bahrain banned Al-Wasat newspaper from publishing online."

On this level, the signatories of this letter said, "We strongly call on the government to reverse these needless policies."

"These recent actions have had a chilling effect on the media's ability to cover Bahrain at a time when the country faces a growing set of challenges," the letter further read.

"The apparently coordinated action against journalists working for international news agencies suggests that Bahrain (...) aims to block independent news and images from reaching the wider world," the letter added.

The organizations who jointly wrote the letter stated, "We collectively call on you to instruct your government to allow journalists to freely operate in Bahrain and to give foreign media organizations equal access to the country," reiterating, "We welcome the opportunity to discuss the matter further."