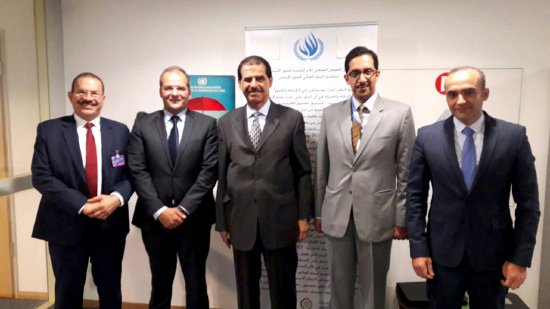 Bahrain Mirror: The National Institution for Human Rights (NIHR)'s delegation to the 27th Session of the Universal Periodic Review (UPR), led by NIHR's Chairman, Said bin Mohammed Al-Faihani, met the Chief of the Middle East and North Africa Section at the Office of the High Commissioner for Human Rights (OHCHR), Mohammad Ali Al-Nsour.

NIHR said in a statement that its chief briefed Al-Nsour on the Royal Order 23/2017 on forming the Council of Commissioners at the NIHR, the elections held to elect the panel's chairman and deputy chairman for the a four-year term, as well as on the amendments to the NIHR's law promulgated by Decree-Law 20/2016, all of them were in accordance with the remarks made by the Global Alliance of National Human Rights Institutions (GANHRI)'s Sub-Committee on Accreditation.

Al-Nsour congratulated the chairman and members of the NIHR for their new posts, wishing them every success, according to the statement.