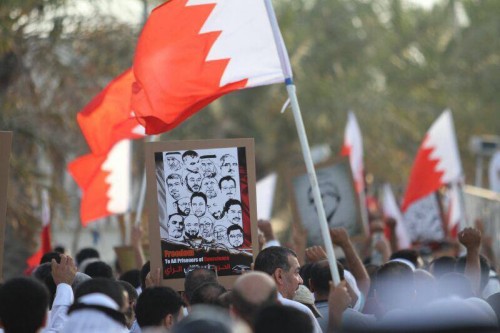 Bahrain Mirror: A number of detained Shiite clerics in the Central Jaw Prison, said that introducing the personal status law (family provisions - the Jaafari part) by the authorities again, and before that the Khums and legitimate money, aims at "weakening the opposition, and pressuring it to abandon its legitimate demands and its popular movement."

In a statement issued by the detained opposition figures (on Tuesday November 1, 2016), each of Sheikh Abdul Jalil al-Mokdad, Ali Salman, Sheikh Mohammad Habib al-Mokdad, Sheikh Mirza Mahrous, and Sheikh Saeed al-Nouri stressed the importance of "continuing with the civilized peaceful movement that demands social justice and legitimate rights, defends legitimate values, and stands in solidarity with the esteemed scholars in their honorable stances."

They confirmed, "It is the people's right to demand their legitimate rights illustrated by a Council that has the legislative and monitoring powers in its hand, an elected government that represents the people's true will, and an independent judiciary council, which gives the oppressed his right over the oppressor. Behind this all, there would be a constitution that guarantees these rights in a clear way."

The figures concluded their statement with expressing their gratitude to the people of Bahrain, for their "huge sacrifices and honorable positions in demanding their legitimate rights, and defending their religious and political figures."