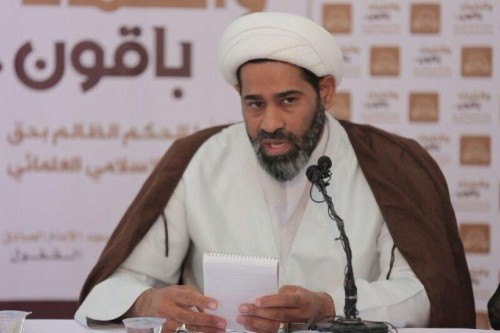 Bahrain Mirror: The Bahraini Public Prosecution raised charges of "publicly promoting animosity against the regime" against the head of the Arbitral Tribunal of Al-Wefaq National Islamic Society, Sheikh Jassim Al-Khayat, on Monday (February 22, 2016) over a sermon he had delivered on Friday (February 12, 2016).

Al-Wefaq deemed the summoning of Sheikh Al-Khayat "unacceptable", since it comes as part of a campaign aimed at silencing opposition voices, restricting freedom of opinion and expression, halting political activism as well as quieting the people's voice to mislead the international into thinking that the situation isn't as it's being portrayed.

Al-Wefaq further called for putting an end to the targeting and threatening of clerics, activists, politicians and human rights defenders by repeated summonings and detentions for only speaking of basic human and civil rights of citizens.