Bahraini King Says his Sons Nasser & Khalid Were in Yemen 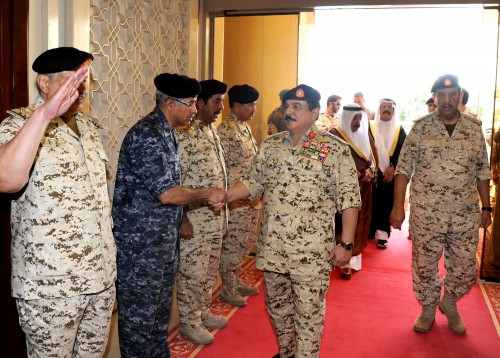 Bahrain Mirror: Bahraini King Hamad bin Isa Al Khalifa stressed on Sunday (September 6, 2015) that his sons Nasser and Khalid were among the Gulf forces that were targeted by a Yemeni military attack on a base in Yemen's Ma'rib.

Five Bahraini soldiers along with 45 soldiers from the United Arab Emirates were killed in a missile strike on a military base in Ma'rib on Friday (September 4, 2015).

During his visit to the army's headquarters where he met officers, taking part in the war on Yemen, Hamad bin Isa said: "We share parental emotions with the citizens in these circumstances. My sons, HH Brigadier Sheikh Nasser bin Hamad Al Khalifa and HH Sheikh Major Khalid bin Hamad Al Khalifa were there participating in carrying out their sacred national duty hand in hand with their brothers of the Saudi-led Arab Coalition defending legitimacy in Yemen, and they will continue to do so united in one team with their brothers."