Bahrain Mirror (Exclusive): It is very ironic that the Crown Prince's mask stirs the Bahraini public opinion more than the visit of U.S. Secretary of State Mike Pompeo, during which Salman bin Hamad promoted McLaren's first mask. The Crown Prince's mask stirred public opinion more than the Coronavirus pandemic, because of which he supposedly wore the luxurious mask to prevent contracting the virus from Pompeo and his team who came from Washington (the world's largest epicenter of the pandemic).

The media has shed light on the elegant mask. Twitter users started arguments to decode the political message behind the mask. The Crown Prince's mask was the political "issue", rather than the issue of Gulf normalization with Israel, the deteriorating economic conditions in the country, and, of course, the Coronavirus.

The "odd mask" confuses critics and followers, only because Bahrain's Crown Prince, who previously appeared in commercials for luxury watches, wore it during a meeting that will be internationally covered. Salman bin Hamad received Pompeo while wearing the mask, hiding half of his face, not from Coronavirus, but apparently for many other reasons. Was this really the message, or was it a marketing ploy for the Formula 1 Race on the eve of the announcement of its resumption in Bahrain this year, and the business developments of McLaren, which is struggling to survive after a loan from Bahrain (the state owns the highest share stake).

Some went too far to give the slogan written on the mask (we race as one) a political dimension linked to Pompeo's visit, or as a tweeter pointed out, it was merely a marketing slogan for Formula 1, "worn by the Crown Prince to express his priorities."

This sad, funny argument takes place, while life and death issues are ignored: Coronavirus, Israel, and the collapsed economy.

Although such discussions are usually initiated from outside sources, they drag people too easily to this ridiculous margin. Perhaps, there is no more room in the public space except for ridiculous topics, turning an image like this into an issue of serious political aspects that must be debated. 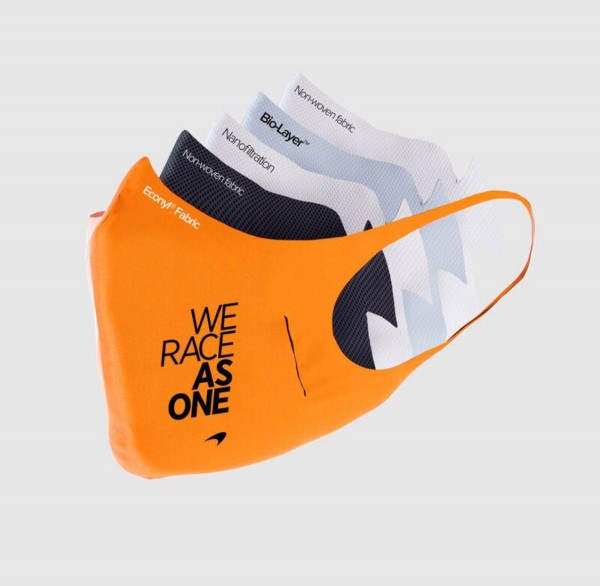 It seems very normal in a country where people have no role or participation in decision-making, neither internal nor external. Their discussions will not add anything, following 10 years of exclusion. They are only a way to express frustration and helplessness.

As if people are made to turn their attention away from the political struggle regarding the commemoration of Ashura amid the outbreak of the Coronavirus, in favor of the Crown Prince's mask. Instead of citizens (who have the right to receive state services) demanding the protection of their sacred religious mourning gatherings to ensure that they are safely held, they resolutely face a fierce media and political war to prevent them by all means from holding commemoration rituals. Will the Crown Prince's mask prevent the rise of Coronavirus cases in Ashura, or will it allow it to be commemorated safely? Will it stop the amount of insults and sectarian abuse that Shiite citizens are subjected to for insisting on their religious freedom?

Will the Crown Prince's mask save Bahrain's economy from bankruptcy? Will it enable the economy to pay its new debt after its ceiling was raised to 15 billion dinars? Will it address the disastrous effects of Coronavirus on the country's economy? Will it return the economy that was stolen by the dealers of residence permits and the foreign "investors"?

On the external level, will the Crown Prince's mask stop the march towards normalization with Israel? Does it have anything to do with the king's statement praised by the Palestine Liberation Organization on the issue of peace? Is it pushing away UAE normalization with Israel or "global" willingness to accept it? Was the Crown Prince blocking his nose from the smell of Israel that Pompeo brought to the Gulf through the gate of the United Arab Emirates? Or was he receiving it peacefully in the name of religious tolerance?

Isn't it odd that one mask can open all these public debates.