Abrams, a senior politician in the administrations of Presidents Ronald Reagan and George W. Bush Sr., has been a strong critic of the Bahraini regime since the February 14, 2011 revolution, and has written numerous articles and analyses calling for a change of government in Bahrain and increased U.S. pressure on the Bahraini and Saudi regimes to resolve the political crisis and achieve reform.

He also participated in political and human rights seminars held in Congress on the Bahraini file, and was among 28 U.S. experts who signed a letter calling on former U.S. President Barack Obama to discuss Bahrain's status with the Saudi monarch during his visit to Riyadh in 2014.

Abrams' writings continued since the outbreak of the uprising until he returned to the U.S. State Department in 2019. Bahrain Mirror has translated his articles since 2012.

One of Elliot Abrams' most prominent views is his call for power-sharing between the government and the people of Bahrain. He believes that "the Bahraini Prime Minister has made progress impossible" and that the Crown Prince has been "silenced". He also went too far to say that Bahrain's ruling family has lost its "legitimacy".

Abrams called for the replacement of Prime Minister Khalifa bin Salman and an end to his rule, saying that Bahrain is in a political crisis that ends only with negotiations, following the repression of "the Shiite majority and the reformers demanding democracy."

Abrams mocked the passage of a law under which people in Bahrain are jailed for insulting the king and wrote in 2014 that the danger is "Ahead in Bahrain" and that the king must act now to save the country from conflict.

Abrams said the parliamentary experiment in Bahrain had failed and said that Al-Wefaq's participation in parliament in 2006 was under pressure to try out the political game and bring about change, "but there were no benefits, the experiment failed".

The diplomat criticized the arrest of human rights activist Nabeel Rajab, considering the Bahraini government's actions reactionary and self-defeating. He said the arrest of every one who comments on the government's performance is similar to the world of "Franz Kafka".

He also stressed that the Government of Bahrain stands idly in the face of the turn of Sunnis to extremism and their attraction to violent Islamist groups. 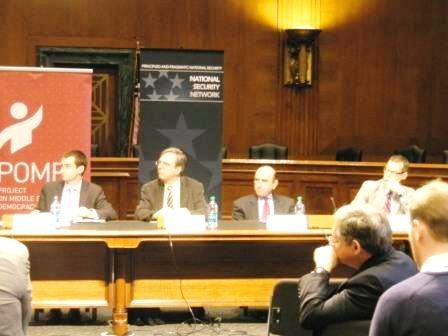 In 2015, the senior politician saw that Obama had abandoned the issue of Bahrain, and that the government had succeeded in completely silencing him. In a detailed article, he suggested several methods of pressuring the Bahraini government, including the withdrawal of some military forces from the US fifth fleet.

Abrams opposed the resumption of military sales to Bahrain in 2015, strongly criticized the arrest of Bahraini opposition leader Sheikh Ali Salman and accused the then-administration of "misrepresenting the truth" about the situation in Bahrain.

In the era of Trump, who rejected a proposal by his Secretary of State to appoint Abrams in a high-ranking political post due to the fact he opposed him in the elections, the man continued to write about Bahrain, criticizing in 2017 the dissolution of the Wa'ad society saying that "the government of Bahrain is simply shutting down all political life and criminalizing all criticism of its actions."

Abrams's last article on Bahrain was in February 2018 in which he criticized Rajab's new prison sentence and said that "Bahrain is in a downward spiral. Whether it can be stopped is not clear." He added that a "joint effort by the United States, Saudi Arabia, and the UAE is the only solution I can imagine."

Abrams has said more than once that Riyadh views Bahrain as an "existential issue" and part of the Saudi rivalry with Iran, which he believes that it is supplying some groups in Bahrain with weapons. He even claimed that the Obama administration went beyond the evidence at the time so as not to affect the course of negotiations with Tehran on the nuclear issue.

Abrams, who has worked in foreign policy since the 1980s, was the most prominent man in the Iran-Contra affair, a secret deal under which the United States sold weapons to Tehran during the Iran-Iraq war.

He was also a strong critic of Obama's Iran nuclear deal that Trump canceled in 2018.

Today, Abrams is carrying the whole Iranian portfolio, with all its interlocking files. Some say he is Trump's latest hope to overcome the "maximum pressure: policy on Iran and drag it to the negotiating table to reach an alternative deal, especially after his recent statement that he would make a deal with Iran quickly if he is re-elected."

Others see him as the "minister of dirty wars" and responsible for attempted political coups in several Latin American countries. Because he is one of Israel's biggest supporters, his appointment is nothing more than a strengthening of the "War Party".

While he is in his own "whirlwind", the question remains, will Elliot Abrams remember Bahrain again after all these years of following this file?