In a gloomy scene, which was video recorded for the first time, and broadcast by a specialized news page, a group of men appeared in a cemetery participating in the funeral of their departed loved ones. With grief and pain apparent on their faces, the masked men prayed over the bodies, which were isolated inside a van, neither having a last look nor a farewell!

Four patients died yesterday and 6 the day before that, in a country where the disease has been ravaging it for months. Now there are 35,000 cases, with an increase of 5,000 in just one week. And there are 124 deaths, an increase of 20 deaths during the same week.

Amidst these alarming numbers in this tiny island, the puzzling question remains: Why did this large number of people die in a very short time span compared to the whole pandemic period (85% of deaths occurred during a month and a half out of the whole 5 month period), i.e. 30% of the total age of the pandemic in Bahrain? What is happening inside hospitals and isolation centers, and is there a new policy in dealing with cases that enter the care units?

On the level of Gulf countries, Bahrain has the second largest mortality rate in terms of population (71 deaths per one million people), following Kuwait, and globally Bahrain is still the second country after Qatar with the largest rate of cases relative to the population (among countries with a population of more than 100,000).

Number of daily cases rises a lot, decreases a little, then rises even more!

The index of case numbers in Bahrain remained on the rise, but with fluctuation. The numbers go up a lot and then go down a little bit, but then they skyrocketed in the past two months. This week the average number of cases was 518, higher than last week (502), while the highest weekly average of cases reached 563 at the end of last June.

The total of Bahraini patients this week was 1621 (about 45% of all cases). In the detailed statistics that the Ministry of Health began publishing for the first time, it showed that 40 cases came from abroad, 955 examined after symptoms appeared, 1720 came in contact with people who've contracted the virus, and 774 discovered through random screening campaigns.

90 patients are fighting the deadly virus in the intensive care units, while the number of Coronavirus tests conducted by the state exceeded 700,000.

Only one indicator started to decline gradually, which is the indicator of existing cases, as it has gone down to 4152 after it had reached 5723 in mid-June.

As doubts grow about the possibility of commemorating the religious season of Ashura, amidst the assertion of well-known clerics that they have not yet called for observing any remembrance rituals, the authorities decided to continue the closure of mosques and prevent collective worship. In a related development, the government imposed on travelers (arriving in the country) the payment of the compulsory medical examination.

The team assigned to tackle the Coronavirus pandemic did not hold any press conference this week, which they usually do, while the Coordination Committee held its meeting on Thursday, under the chairmanship of the Crown Prince, without announcing any decisions or details, even though it said it discussed "the latest developments in dealing with the Coronavirus."

The cases uncovered by the Ministry indicated the extent to which precautionary measures are being violated, whether among families or in the workplace; a grandfather transmits the virus to 13 members of his family, including his grandchildren, a foreign worker transmits the disease to 7 of his co-workers, and is discovered by accident (via random examination), and contact with an infected Bahraini and his colleagues spread the virus to 5 homes.

A Bahraini attended a family funeral mourning gathering and infected 26 family members, including grandparents and grandchildren, from 9 different homes. Another Bahraini transmitted the virus to his wife, and his wife to her co-worker, and so on to 11 members of the coworker's family and a domestic worker (4 different homes).

Total coronavirus cases in Bahrain as of July 14, 2020

Amid this sad and gloomy atmosphere, citizens questioned the government's performance and its handling of the pandemic, calling it hesitant and careless, and wondered whether it originally wanted for undisclosed reasons to have this situation go on for a longer period of time, while some called for tougher measures such as a partial curfew, to save lives.

14 million infections and nearly 600,000 deaths have resulted from the coronavirus worldwide to date. The pressures have finally forced US President Trump to wear a mask during his public appearance, while tests have shown that the Brazilian president (who has largely underestimated the disease) has not recovered from his coronavirus infection so far.

Although the government in Bahrain issued an order obliging citizens to wear a mask everywhere and at all times and imposed sanctions on violators, the King of Bahrain, Hamad bin Isa Al Khalifa, still does not seem to recognize these decisions. This is how the head of state appeared during his visit to the military yesterday, not wearing any type of mask! 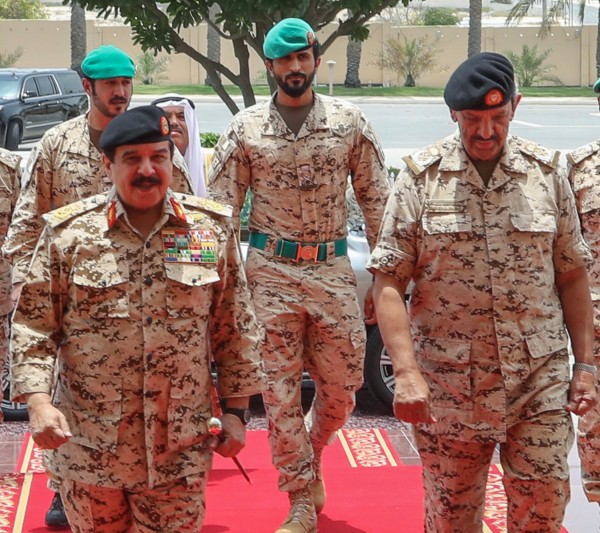 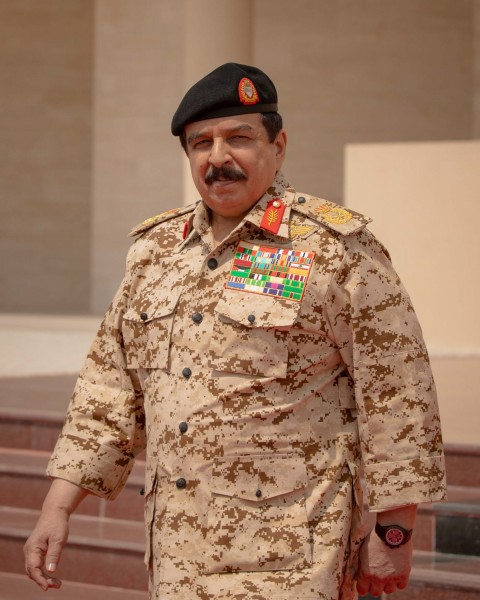 The King of Bahrain during his visit to the headquarters of the Bahrain Defense Force (July 15, 2020)