Bahrain Mirror (Exclusive): After much ado, a government decision was issued announcing new support package features to save the crumbling economy:

First: Paying only 50% of the salaries of Bahrainis who work in hotels, restaurants, salons, cinemas, travel agencies, gyms, and training centers (the most affected facilities) for 3 months from the Unemployment Fund;

Second: Exempting citizens' from paying electricity and water bills of their first home for 3 months;

The weakness of this package prompted the Crown Prince to stay away from the scene. This time the decision was issued by the Cabinet, the government of Khalifa bin Salman, and not from his coordinating committee (Tuesday's government), as has been usually taking place since the Coronavirus outbreak.

What also prompted Salman bin Hamad to distance himself was the McLaren loan. After it was confirmed that the British sports car company (which Mumtalakat owns 62.55% of its shares) was given a £280 million loan (131 million dinars) from the National Bank of Bahrain (44% owned by Mumtalakat) without guarantees, his government's strategy and priorities were exposed, which is saving investments and assets.

Why is the government supporting, through the country's liquidity, weak investments that benefit others (foreign shareholders) in the short and long term, while the Unemployment and Tamkeen Funds, as well as the State Treasury, are being drained by creating packages that only have a painkiller impact on the local economy.

131 million dinars is equal to 60% of the salaries of all Bahrainis working in the private sector for three months, all of them and not just in 6 sectors. How many Bahrainis are working in these six sectors which the government has announced its continued support for? How many Bahrainis work in restaurants and salons? Can these people even cover the rest of the salaries? Are they going to sign up for this support or will they dismiss everyone? Are the doors open now to dismiss Bahrainis in other sectors if they are no longer able to meet their operational expenses in this besieged and completely controlled economy?

Why, at the very least, aren't these "loans" and "liquidity" directed at investing inside Bahrain, and finding alternative jobs for Bahrainis, thousands of whom will no doubt be laid off next month from institutions that have no choice but to phase out.

If the government is not expecting the next crisis, and cannot imagine the queues of the unemployed in front of the Ministry of Labor soon, how would the MPs expect this?

The MPs interventions in the honorary meetings which they call for with the government are like abhorrent unfunny political jokes. The Chairman of the Finance and Economic Committee in the House of Representatives MP Ahmad Sabah Al-Salloum, for example, says they are not seeking "a package that only covers the next three months, but rather covers a whole year."

Council of Representatives' Financial and Economic Affairs Committee Chairman Ahmed Al-Amer stated before announcing the package details that "we prefer not to redraw from the Unemployment Fund, which has been used twice before. We will strive not to increase the public debt to significant rates that will burden the economic situation in the future." He then contradicts himself in another statement and admits that "great difficulties and challenges will face the national economy in the next phase, most notably the scarcity of liquidity and the possibility of increased public debt."

Of course, neither Al-Amer nor Bin Salloum know and cannot know what alternatives can be "used" to withdraw from. They are not even ready to study and put forward these alternatives or help implement them. Bin Salloum, in particular, has never been prepared except to defend the "interests traders" which he represents. To them, these interests are above all and superior to everything.

The latest vital indicators of the damage to the economy in Bahrain show the decline in international exports by 55%, international imports by 73%, passengers through Bahrain International Airport by 98%, incoming trucks by 39%, hotel occupancy rate by 72%, cash withdrawals by 21%, sales through sales point by 12%, fuel sales by 32%, individual commercial records by 49%, company business records by 48%, value of real estate transactions by 35%, number of real estate transactions by 32%, and building licenses by 26%. 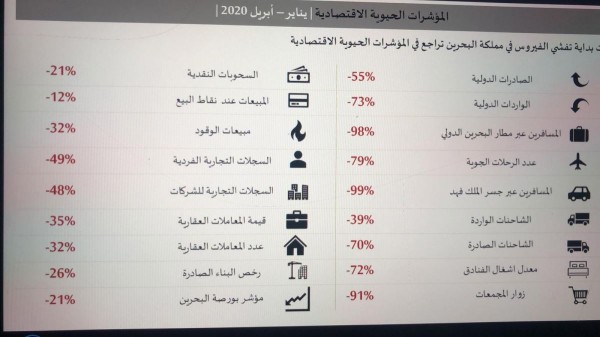 According to economists, all these negative values mean deflation that will affect Bahrainis at first, because their livelihood is no longer a concern to anyone. They are not a priority, and no one is defending them anymore.

In an economy that does not serve them at all, thousands of Bahrainis will soon lose their jobs, "legally and justifiably"! And poverty will kill them before Coronavirus.