Bahrain Mirror (Exclusive): A few hours ahead of the "Coordinating Committee" meeting, headed by the Crown Prince, the Finance Minister met with the Commander-in-Chief of the Bahrain Defence Force, Marshal Khalifa bin Ahmed Al Khalifa. The day prior, the same minister attended the Cabinet meeting, under the chairmanship of Khalifa bin Salman.

The minister's marathon of meetings demonstrates a close picture of the nature of the "authorities' structure" in Bahrain since 2011; a state without a central government, particularly regarding crucial decisions. Khalifa bin Salman's government convenes on Monday, the government of the Crown Prince (Coordinating Committee) meets on Tuesday, and that of Al-Khawalid meets whenever it wants, however it wants, and with whomever it wants.

To date, the "Tuesday government" hasn't issued any decision, although it had finished the meeting at noon. People used to receive its [Tuesday's government] decisions late Tuesday, the next day or even on Thursday. The decisions of this "coordination" is not limited to its members, especially since it is of superior power and scope to any other authority.

What do the authorities want and what is their plan? 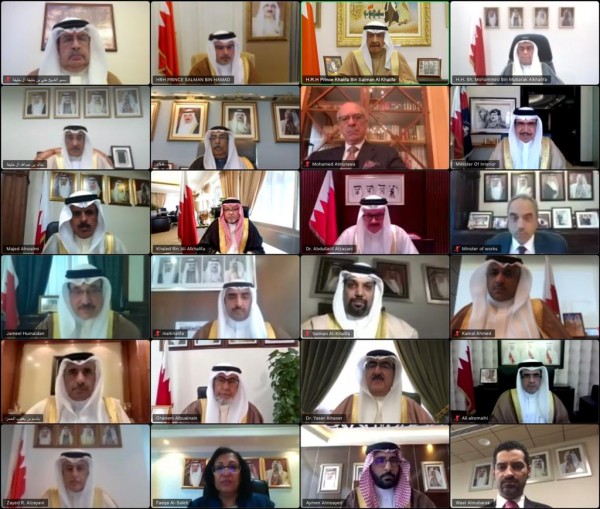 As the finance minister goes from one meeting to another, a dark and very frightening fate is awaiting thousands of Bahraini private sector employees. Employees are not safe in their jobs in telecommunications companies; how can they be safe in small companies whose revenues have completely stopped? No one in the three governments thinks that traders, whether small or big, will sacrifice their profits to keep employees, and it seems only that the three governments will sacrifice the employees regardless of  their numbers.

The finance minister's recent remarks declared more "deficit". He said the financial package ran out of money? But what was the package? And where did it come from?

Other than waiving electricity bills (150 million dinars), during the Coronavirus pandemic, the government did not provide any support to the economy from its pockets! The story of the 4.3 billion dinars begins with the "Unemployment Fund": 215 million dinars to pay the salaries of Bahrainis in the private sector for 3 months, then "Tamkeen": 40 million cash grants to help institutions who are unable to pay their expenses (including rent and salaries of foreign employees), and finally the Liquidity Fund: 200 million loans with low interest rates for institutions. Neither the Unemployment Fund, Tamkeen nor the Liquidity Fund are government funds. The first is a 1% contribution imposed on employees' salaries since 13 years ago, the second income comes from the fees of the Labor Market Regulatory Authority imposed on the recruitment of foreign workers in the private sector, and the third is funded by 4 private banks.

The remaining billions (3.7 billion) were only "paper decisions" by the Central Bank of Bahrain to reduce the financing-to-value ratio and reduce the cash reserve requirements of banks and financial institutions (reserve deposits imposed by the bank on all banks), to increase their lending capacity, and to adapt their crisis in dealing with the postponement of all loan and credit card installments for 6 months.

"Tuesday Government" meeting is the penultimate meeting in June, the last month of the financial package! Nothing is on the horizon to "save" the poor people. No corporate taxes, no rush to Gulf aids, and no one even knows the authorities' priorities and intentions.

To understand the "Tuesday government" and the decision-making mechanism (which closes, opens, draws and pays), we have to ask what is special about this government? And how does it differ from the Cabinet? By looking at some of the "wondrous" and unsteady faces of its members, or the small number of members invited to its meetings (thanks to the visual communication programs). Among the strangest of these faces, we see: Nasser bin Hamad, the king's son! Nasser has a permanent seat in it, although his competence or role in it is not known!

The other seats are distributed among deputy prime ministers (with the exception of Jawad Al-Areed), and ministers attending some meetings based on necessity. The Labor Minister attends the meetings sometimes and sometimes not, sometimes he is called the Minister of Labor and other times he isn't. The other important faces that are not in the government are: Isa Al-Hammadi, former Minister of Information, Nawaf Hamza, Head of Legislation and Legal Opinion (former Chief Prosecutor), Ahmed bin Isa Al Khalifa, Assistant Undersecretary for Nationality, Passports and Residency (Interior Ministry), Tariq Al-Hassan, Head of Public Security, Osama Al-Absi, Head of the Labour Market Regulatory Authority.

These brilliant minds who have great experience (mainly in the security field) are the crown prince's staff responsible for making crucial decisions about health and the economy (with the permission of the Commander-in-Chief, of course).

Perhaps, there is no more time to detract from politics. There is no use to yell at the regime and remind it of its accumulated inability to manage this country's economy (unemployment, high prices and housing), and how it has led it to bankruptcy (public debt), stole its public resources and hid its arms budget. But, even if these funds were dropped into the hands of this government, without any possibility of accountability, why would 14 billion dinars move inside the country without any direct benefit to the state? What is the use of an economy of this size when the state is unable to save jobs and even its own treasury? Why do capitals of this size move annually into the market freely without taxes? The answer is at the Four Seasons hotel.