Nabeel Rajab, Icon from the Gulf

Bahrain Mirror (Exclusive): It is difficult to count the number of summonses, interrogations, arrests and prison terms that have passed through Nabeel Rajab's life. We can call him Martin Luther of the Gulf. He; however, has his own journey of pain and suffering. He can be called just that, Nabeel Rajab, an icon from the Gulf.

Here in the Gulf, where the demand for democracy and freedom is an unforgivable sin, Nabeel was the voice that resisted fear and terror when the regime demolished mosques, causing a shock that puzzled many people, since speaking up had a terrible price. In those very moments, an unprecedented fountain of courage exploded. He has become the voice of the families of martyrs, prisoners, the injured and displaced. He has become the voice of Bahrain which demands freedom.

The 56-year-old human rights defender has not changed. His smile and handsomeness remained. He remained adhered to principles, for which the people pay hefty prices. Rajab was born on January 1, 1964 in Bahrain. He belongs to a long-standing Bahraini family which has ties with the authorities. However, Nabeel had a different difficult path in his life.

He spent years inside prison, where he was beaten and tortured. He faces livelihood pressures after his dismissal and restrictions on his opportunities and that of his children in work and trade. Rajab paid, but his smile and calmness remained unchanged.

Rajab studied political science and history at the University of Pune, India, and graduated in 1987. He started his human rights advocacy activism in the 1990s and led a campaign against rights abuses in Bahrain. His shop was set on fire in the 1990s. It is believed that this was carried out by state security agents. In 2000, in collaboration with other activists, Rajab founded the Bahrain Society for Human Rights in Bahrain, which was the country's first human rights organization.

In July 2002, he founded the Bahrain Center for Human Rights with his colleague Abdulhadi Al-Khawaja, who is now serving a life sentence for his human rights and political activism.

In a short period of time, the new center became one of the most prominent Arab organizations in the field of defending human rights and fighting corruption. The center was closed by the Bahraini authorities in 2004, following a well-known seminar held at Al-Oruba Club headquarters in Al-Jufair, a seminar during which Prime Minister Khalifa bin Salman was openly and unprecedentedly criticized.

During the 2006 unemployment sit-in held near the King's Royal Office, Rajab, along with Abdulhadi Al-Khawaja and a number of unemployed people, was severely beaten. In fact, it was an act of torture committed in public. There are photographs documenting what happened to Rajab during this incident. 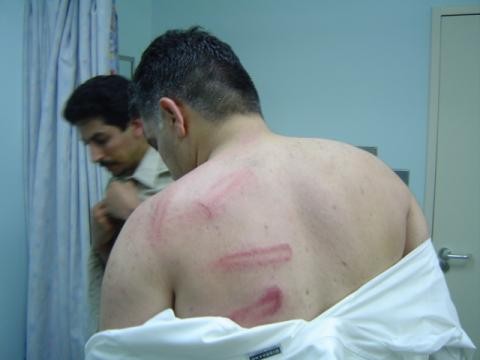 Local newspapers launched a major campaign against Rajab and Al-Khawaja, and some writers demanded their arrests, especially after a seminar they organized in the United States.

During the early hours of the uprising, which erupted in the country on February 14, 2011, Rajab, along with other human rights activists, took to Al-Budai Street to demand real democratic reforms.

Rajab has become the most prominent rights activist followed by hundreds of thousands on social media, and has become the most watched and monitored figure. He was arrested several times and imprisoned on various charges, such as illegal gathering and insulting the authorities via Twitter.

In 2011, he was arrested from his home and detained for a short time, but during this time he was severely hit on his head for welcoming a CNN media team headed by reporter Amber Lyon, who reported to the world about the demolition of mosques. Nabeel Rajab was the one who spoke to her and described the situation in Bahrain.

On May 5, 2012, Rajab was arrested upon his return from Beirut for "insulting a legal entity" via Twitter, and was prosecuted for participating in an anti-regime demonstration in the capital Manama.

After being released on bail on May 28, 2012, the authorities re-arrested him on June 6, 2012 on charges of "insulting the residents of a Sunni neighborhood of Bahrain for their links to the ruling family."

This charge was not credible, especially that Rajab was the most determined person in following up the case of eight Sunni Bahrainis arrested by the United States in Guantanamo Bay on charges of belonging to Al-Qaeda.

Rajab also led the defense of Mohammed Al-Binali, an employee at the Ministry of Interior's Immigration and Passports Department, who was dismissed from his job on charges of leaking information about the political naturalization to the opposition.

Despite all these facts, Rajab was sentenced on August 16, 2012, to three years in prison for participating in unauthorized marches. At that time, Rajab went on hunger strike, in protest against being prevented from attending his mother's funeral procession. This tragedy has been one of his most personal pains, as his tears cease to stop when he remembers that he was not near his mother in her last moments.

After being released on health grounds on July 15, 2015 under a royal pardon, he was arrested again on June 13, 2016 and charged with making "allegations and lies through which he abused the regulatory bodies represented by the Interior Ministry and its security institutions", by accusing them of torturing prisoners.

His health problems exacerbated after his arrest and after being placed in solitary confinement for two weeks. He had an operation performed on his back, but was sent back to prison only two days later.

In prison, Nabeel Rajab was isolated from all political prisoners. The authorities tried through a number of measures to harm him mentally and psychologically. He was placed in a prison cell along with prisoners convicted over cases related to prostitution and ISIS. Nabeel was humiliated and insulted by the prisoners and was subjected to attempts of abuse. All his appeals to the Public Prosecution fell on deaf ears, as it deliberately continued to hurt him even after verdicts were issued against him.

On July 10, 2017, a court sentenced him to two years in prison for spreading false news about the kingdom through Western media. Rajab criticized U.S. President Donald Trump in a column published by The New York Times for selling weapons to Bahrain and Saudi Arabia, citing their human rights records, noting that the White House gave the green light, under Trump era, to a $5 billion arms deal with Bahrain, which was suspended by his predecessor, Barack Obama, on human rights grounds.

Following the publication of the article in the newspaper, the public prosecutor's office added a new charge to Rajab's indictment, i.e. "publishing a column in a foreign newspaper containing false news, statements and rumors." As a result, Rajab was sentenced to two additional years in prison.

On February 21, 2018, a court issued a new prison sentence of five years against him for broadcasting false news and rumors in wartime, insulting a foreign country and insulting the Interior Ministry. This case was due to Rajab's criticism of the war on Yemen.

He was released on June 9, 2020 after spending nearly five years in prison and after being included in the alternative punishment system. Rajab has three years remaining of his prison term.

No one knows what will happen in the future, but his release certainly left great joy in the hearts of free Bahrainis and the Arab and international human rights community. 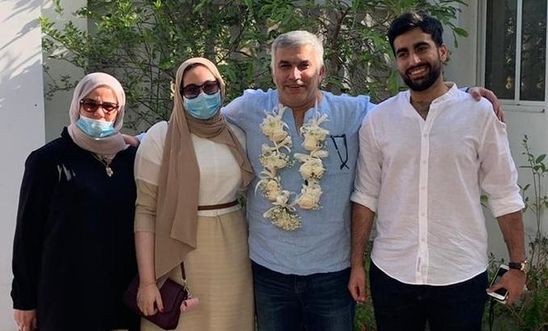