Safes without Guards: How “Bahrain University” was Taken over by Naturalized Citizens

Bahrain Mirror (Exclusive): The people of Bahrain do not get provoked for no reason. They feel as if they are marginalized and strangers in their own country. This is not an exaggeration; it is a fact backed by documents. Bahrain Mirror presents in this report examples of the threat posed by naturalization in one of Bahrain's educational institutions.

The University of Bahrain, established 33 years ago (1986), is one of the most significant national institutions where Bahrainis are being marginalized. Most of the university's educational staff are foreigners and most of the influencers working in it are naturalized. This is a sample of only one of the groups of corrupt naturalized citizens, who have turned the university into their own business.

Salem Abulrahman Ghomaid, a Libyan national, born in 1955, who came to teach in the university, was naturalized in 2010. However, he didn't change his status in the university from foreign to Bahraini professor, so that he would continue to benefit from huge allowances added to his salary for being a foreign professor and legal advisor to the university president.

Salem enjoyed all the advantages as a foreign professor working in the law faculty. He also received all the services advantages as a Bahraini citizen. Some of his colleagues say that he received a house from the housing ministry very quickly and some of his children received governmental scholarships. He opened his own law firm and started giving lectures at Islamic banks and extending his business contracts in his capacity as an owner of a law firm. He also started standing in court against Bahrain University, after working as a legal advisor for its president, over cases of other professors who have financial demands from the university.

His wife received a salary from the university since she had no job, according to the university laws, before being granted by Ahmed Al-Zayed, the head of the Civil Service Bureau (CSB), a job in the same bureau.

After six whole years, the issue was finally discovered by the administrative authorities. A note was written to the university's vice President explaining the situation of this person, and clearly demanding that Salem Ghomaid pay back the financial advantages he received for being "a foreign professor" during the six-year period.

Salem will of course not pay even one dinar because he knows that the country is tattered and plagued with corruption, which is the basis of governance there. Thus, he found that resigning and moving to another university is a good way out. He resigned and went to work at the Kingdom's University as a professor, in addition to his business. 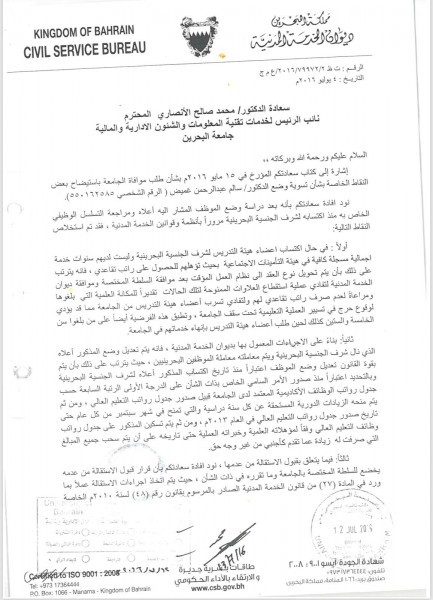 Not the Whole Story

Naturalized citizens at the university exchange benefits as if they were the inheritance of their ancestors. Abdullah Al-Mazoghi is another Libyan who worked at the university and is the one who mediated on Salem Ghomaid's behalf to score him a position at the university. After a while, Al-Mazoghi was dismissed from his job at the business faculty for receiving a very bad evaluation.

Now it was time to return the favor. Ghomaid who served as the legal advisor to the university president, nominated his dismissed fellow countryman for director of the university's internal audit office.

The CSB rejected the appointment of Al-Mazoghi as Director of Internal Audit, but the university administration didn't take the CBS's refusal into consideration and A-Mazoghi continued to occupy that post and continues to receive his salary as director to date.

What's ridiculous is that, even after leaving the university that he robbed for six years, Salem Ghomaid used to enter along with Al-Mazoghi and have a look at the university's internal files. To them, this is not a real country. It's only a loosely locked safe that invites theft. 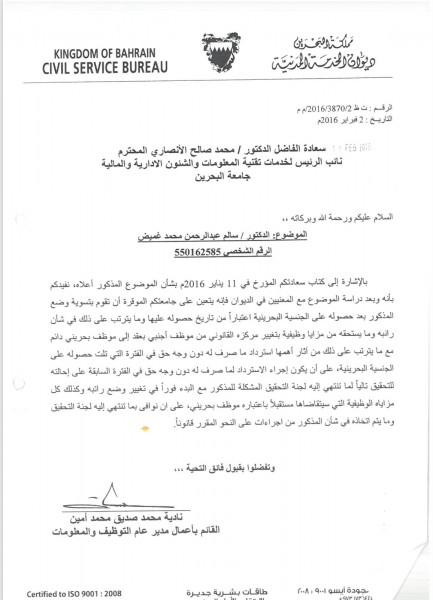 There is a Sudanese professor who has a connection to these two Libyan nationals' story. She is Amal Abulwakil Mohammad Mahmoud, a professor in the business faculty. She is a Sudanese national who was naturalized in Bahrain. She was a colleague of Al-Mazoghi in the faculty.

Abulwakil agreed to give all of the lectures of her colleague who became an audit director. However, she felt aggrieved after a while, because she did not get a reward and a piece of this cake called the University of Bahrain, so she asked for a promotion.

Indeed, Al-Mazoghi nominated her for the post of director of finance and administration and she obtained the position. However, a month after her appointment, the Civil Service Bureau rejected the decision because she was over 65 years old.

But as compensation, she was promoted from an assistant professor to associate professor without conducting any scientific research that would qualify her.

It seems that Amal was unlucky, as after years of promotion the game was exposed and was demoted to her previous position as assistant professor, but no one will order her to return the money she received while she was occupying her higher post.

The lie of naturalizing competent persons is no longer believed by Bahrainis, as is the lie of integration. Ghomaid was preoccupied by the issues of his homeland. In 2013 (i.e., after his naturalization), a YouTube video showed Salem delivering a lecture in the Libyan city of Benghazi on the new Libyan constitution. He used to work in his country in the field of public affairs as a Libyan, while receiving the citizen's advantages in housing, services, allowances as well as foreigner allowances in Bahrain.

Bahrain's University has become a clear example of the violations of some naturalized citizens-  how they play with the resources of the country, and how they mastered the game of power and influence without controls. It is certain that there are those who support them and turn a blind eye to everything they do to Bahrain and its people. 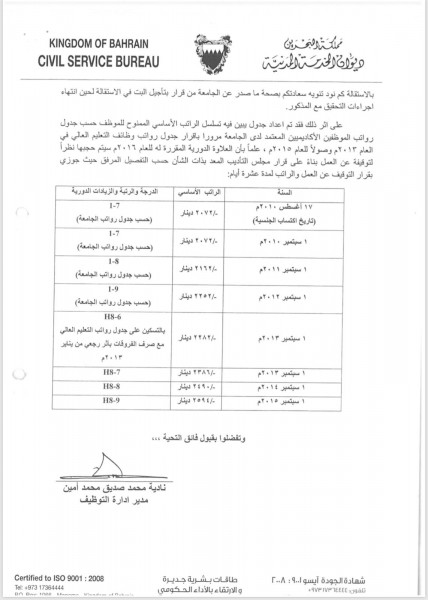